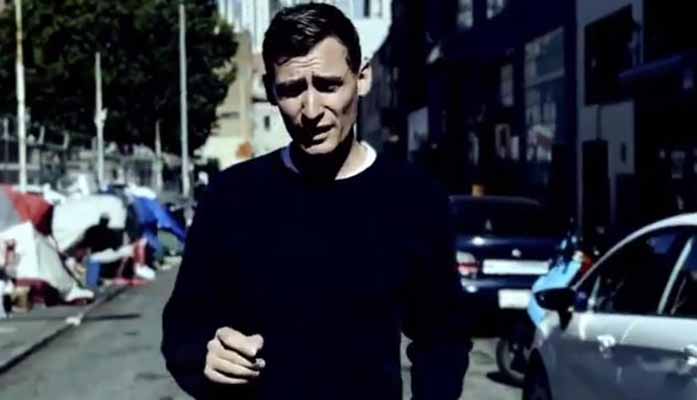 “This is San Francisco; it’s disgusting. This is what Mark Kelly wants Arizona to look like: high taxes, crime, drugs through the roof – it’s insane,” said Masters. “[W]e’ve got to make sure that California stops at the Arizona border.”

We have to make sure that California stops at the Arizona border. pic.twitter.com/jFd4Twrnmn

None of Masters’ campaign videos have cost anything; Masters explained to critics that his friends filmed the videos “for free.”

Masters told AZ Free News that San Francisco governance has essentially legalized crime and drugs in the city. He recalled noticing car after car with shattered windows, the result of criminals who “smash and grab” to loot the vehicles parked in the streets. Masters said that some of these issues were present when he’d lived in the area, but not to that degree.

Masters opined that policy was to blame – not a lack of income or opportunity. He pointed out one of the finer, wealthier neighborhoods in the city, Pacific Heights, and said that more of San Francisco used to uphold that standard of living long ago.

“It’s the failed government [that caused the squalor]. And I think most of the city is quickly becoming what you saw in my video and less like Pacific Heights,” said Masters. “They [the homeless] are victims of the city [….] I don’t think anybody on the political left is doing them any favors.”

House Speaker Nancy Pelosi didn’t respond to our inquiries as to when she last visited San Francisco. The speaker’s last publicized visit there was last February in Chinatown. Pelosi had visited Chinatown to encourage tourism in the earliest stages of the COVID-19 outbreak. After that, Pelosi made various stops for her personal needs – such as her clandestine, maskless trip to a hair salon in September.

Masters said his team also filmed an interview with one one of the locals living on the streets. He’d spoken with an aspiring rapper, “T-Bone,” who gave a firsthand account of living under progressive policies. Masters said that his team may publish that interview.

“He’s trying to get back to doing gigs and my sense is, with the high cost to succeed, it’s really hard to break out of [that environment] once you’re in it. I think it’s really telling when there’s no one there who thinks it’s working well,” explained Masters.

Masters’ campaign video wasn’t his first recent tour to areas afflicted by Democratic policy. Earlier this week, Masters visited the border in Cochise County. His Twitter thread about the tour stirred up controversy with Democrats, who accused Masters of exaggerating when he referenced Border Patrol lingo to call the area a “kill zone.”

A little border patrol dark humor – these corridors are known as “kill zones” because when they stretch for miles, it exposes their vehicles to potential ambush. This is federal land […] in the Huachuca mountains. The federal park rangers, under Biden admin instruction, don’t enforce immigration law. Cartels have more or less free reign to move people and drugs through. Border Patrol is spread too thin. They try but with limited resources and zero political support, it’s hard. Often they’re literally not allowed to do their jobs. Sheriff’s deputies can detain illegals carrying drugs or weapons, but basically have to let everyone else go. In the Tucson Sector alone, there have been 183,000 arrests of illegal aliens in 2021. (85% of them single adults, from more than 100 different countries, and most were released back into the U.S.) Plus 115,000 confirmed getaways. And obviously many more got through undetected.

Look at all the steel just sitting there on the right. On Jan 20, Biden ordered border wall construction stopped.

A little border patrol dark humor — these corridors are known as “kill zones” because when they stretch for miles, it exposes their vehicles to potential ambush pic.twitter.com/53uKkMUwlh

The Pima County Democratic Party responded to Masters’ account with claims that the border region was actually peaceful, and claimed that no border crisis existed.

“Hey @bgmasters – this is actually what our border region looks like,” stated the organization. “It is not some imaginary, cosplay, video game, that you like to refer to as a “Kill Zone” – it is a diverse, beautiful, and thriving community. #BorderTown #TheBigBorderLie #ThereIsNoBorderCrisis #Qnuts[.]”

Hey @bgmasters – this is actually what our border region looks like. It is not some imaginary, cosplay, video game, that you like to refer to as a “Kill Zone” – it is a diverse, beautiful, and thriving community. #BorderTown #TheBigBorderLie #ThereIsNoBorderCrisis #Qnuts https://t.co/uAFdmVacut

AZ Free News spoke with Border Patrol to inquire about the “kill zone” terminology. Border Sergeant Tim Williams expanded further on what Masters stated. Technically, law enforcement refer to areas like where Masters toured as a “kill zone” or “fatal funnel” because they can only move forward and backward. If officers are ambushed, their movements are limited.

“We call it a ‘fatal funnel’ or ‘kill zone,’ when you get stuck in a hallway and you can’t move side to side and can only move forward or backward. That’s what I was explaining to the candidate: when you’re here, you’re driving down the road with a border wall on the south side and access fencing on the north side,” explained Williams. “They’ve created an officer safety issue [there].”