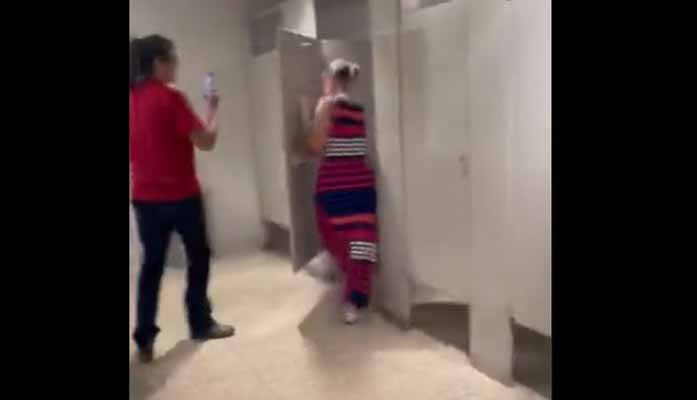 Arizona State University (ASU) Police Department confirmed with AZ Free News that they are investigating the activists who followed and filmed Senator Kyrsten Sinema (D-AZ) inside a bathroom. The senator had stepped out of a class that she teaches at ASU to use the bathroom when activists with Living United for Change in Arizona (LUCHA), an nonprofit activist organization, accosted her and followed her into the bathroom. While filming Sinema, they also filmed other students using the bathroom. The activists demanded that Sinema vote “yes” on the reconciliation bill.

“The ASU Police Department is working with Senator Sinema and conducting a full investigation of the incident that occurred Sunday at the University Center on the Downtown Phoenix campus. Due to the active status of the investigation, we are unable to provide more information at this time,” stated ASU.

One of the LUCHA activists, Karina Ruiz de Diaz, is an illegal immigrant as admitted in a report by CNN. She also accosted Sinema on Monday during a flight, repeatedly asking Sinema to ensure that she and others would be given a pathway to citizenship.

One of LUCHA’s paid activists, Blanca Collazo, told Sinema that she was a product of the Deferred Action for Childhood Arrivals (DACA) policy. Collazo complained that she wasn’t able to visit her deported grandfather before his death because she doesn’t have her citizenship yet. DACA recipients may not leave the country without the government’s prior permission, or “advance parole.” Collazo held her face mask below her nose and mouth as she spoke at Sinema.

“My name is Blanca. I was brought into the United States when I was three years old. And in 2010 my grandparents both got deported because of SB1070. And I’m here because I definitely believe that we need a pathway to citizenship. My grandfather passed away two weeks ago, and I was not able to go to Mexico and visit him because there is no pathway to citizenship,” said Collazo. “We need to hold you accountable to what you told us – what you promised us that you were going to pass when we knocked on doors for you. It’s not right.”

Collazo intended to attend Grand Canyon University (GCU), where she’d been given a scholarship, but told Cronkite News that she opted to work full-time instead due to the pandemic.

Another activist, Sophia Marjanovic, told Sinema that she endured human trafficking because of the lack of worker protection laws. Shortly after, Marjanovic posted on Facebook that she’d caught Sinema “during her pee break” and encouraged others to accost the senator, sharing the location of her class.

“Always have a Lakota Auntie on board! I descend from people who neutralized Custer; I can neutralize anyone. #F***AroundAndFindOut,” wrote Marjanovic. “I told you I wasn’t going to allow this woman to pee in peace in public and mission accomplished!”

As their videos went viral, Marjanovic posted again to chastise her critics. She said that nobody could condemn her actions because she’s a human trafficking survivor, the critics are on “stolen” land anyway, and that white people shouldn’t be allowed to speak on this incident.

“For now, connect with the fact that you are on stolen Indigenous land and Indigenous women and children go missing and murdered because we don’t have access to stable jobs, stable housing, clean water, clean food, or stable decent healthcare [sic] despite the fact that Indigenous people have upheld our end of the treaty in assimilating and getting educated,” wrote Marjanovic. “Give my Indigenous relatives to the South of the US-Mexican border citizenship now! White Communications Departments of organizations, media and campaigns uphold White supremacy. Step out of the way!”

According to Arizona law, it is illegal to film someone in the bathroom and publish it without their consent.

“A. It is unlawful for any person to knowingly photograph, videotape, film, digitally record or by any other means secretly view, with or without a device, another person without that person’s consent under either of the following circumstances: 1. In a restroom, bathroom, locker room, bedroom or other location where the person has a reasonable expectation of privacy and the person is urinating, defecating, dressing, undressing, nude or involved in sexual intercourse or sexual contact. […] It is unlawful to disclose, display, distribute or publish a photograph, videotape, film or digital recording made in violation of subsection A of this section without the consent or knowledge of the person depicted.”

On Monday, Sinema addressed the incident in a statement. She denounced the approach and intentions of the LUCHA activists.

“After deceptively entering a locked, secure building, these individuals filmed and publicly posted videos of my students without their permission — including footage taken of both my students and I using a restroom. In Arizona, we love the First Amendment. We know it is vital to our democracy that constituents can freely petition, protest, or criticize my policy positions and decisions. The activist group that engaged in yesterday’s behavior is one that both my team and I have met with several times since I was elected to the Senate, and I will continue engaging with Arizonans with diverse viewpoints to help inform my work for Arizona. Yesterday’s behavior was not a legitimate protest. It is unacceptable for activist organizations to instruct their members to jeopardize themselves by engaging in unlawful activities such as gaining entry to closed university buildings, disrupting learning environments, and filming students in a restroom.”

It is unclear how the activists gained entry into the locked building.

Sinema won’t support the $3.5 trillion price tag on the reconciliation bill, or the “Build Back Better Act.” Though LUCHA activists mentioned a “pathway to citizenship,” the nearly 2,500 pages of legislation doesn’t expressly include that provision yet. Democrats have been advocating for the inclusion of permanent legal status for illegal immigrants in the bill. However, Senate Parliamentarian Elizabeth MacDonough has twice rejected versions of that proposal.

Currently, the reconciliation bill would offer two years of free community college; child care assistance and universal pre-K; Medicare expansion to cover dental, vision, and hearing, as well as allowing the program to negotiate drug prices to reduce them; a near-four year extension of child tax credits; 12 weeks of comprehensive paid family and medical leave; financial incentives for companies that increase renewable energy supplies, and penalties for those who don’t; an entrepreneurial program for formerly-incarcerated individuals; grants to local governments or groups for community violence prevention.

Funding for this bill would come from raising taxes on corporations, top income earners, and capital gains, as well as strengthening IRS oversight. One proposal to afford further funding would grant the IRS access to total transactions for bank accounts with over $600.

In a press conference addressing the bill on Monday, President Joe Biden was dismissive of what Sinema endured. He insinuated that Sinema would’ve been fine had she had a security detail, prompting the phrase “Based Biden” to trend on Twitter.

“I don’t think they’re appropriate tactics but it happens to everybody,” laughed Biden. “The only people it doesn’t happen to is people who have Secret Service standing around them. So, it’s a part of the process.”

Democrats on the local level weren’t sympathetic to Sinema’s plight, either. State Senator and treasurer candidate Martin Quezada (D-Phoenix) said Sinema was to blame for how her constituents approached her.

“Pro tip for politicians. A good way to not get harassed in restrooms by your constituents is to be available to meet and hear them out on the issues they are passionate about using normal channels,” tweeted Quezada.

Pro tip for politicians. A good way to not get harassed in restrooms by your constituents is to be available to meet and hear them out on the issues they are passionate about using normal channels.

Quezada made clear to AZ Free News that he never approved of how Sinema was treated. He informed us that Sinema hasn’t been keeping the lines of communication open for her constituents.

“[I] do believe that the focus of any story should be more on how Senator Sinema is an elected official. Part of her job is to listen to her constituents, not hide from them. She does not take calls or meetings and her office hangs up on constituents who try to use official channels to communicate with her. When elected officials become completely unaccountable to the people who elected them, you have to understand how they may feel as if they have no other choice but to contact her in unofficial channels,” said Quezada. “Like Senator Sinema, there are certain spaces that I would never want to be approached in. In order to avoid that happening, I fulfill my responsibility of having an open door and communicating with my bosses, the people I serve, through official channels, be they email, phone, in person meetings, Zoom meetings, social media, etc., etc., etc.”

AZ Free News inquired with Sinema’s communications team about these allegations of closing down communications with constituents. They didn’t respond by press time.

Quezada hasn’t been keen on Sinema as of late. The state senator is backing a crowdfunded campaign threatening to fund a primary challenger against Sinema if she doesn’t vote to end the filibuster. The CrowdPAC has already achieved over half of its goal contribution amount.

“Clearly, the people of Arizona are not going [to] simply sit back and allow their wants and needs to be ignored by the same ELECTED officials they helped put into office,” wrote Rodriguez.

Clearly, the people of Arizona are not going simply sit back and allow their wants and needs to be ignored by the same ELECTED officials they helped put into office. https://t.co/7fPrIb4mE0

Rodriguez doesn’t take issue with public exposure of things traditionally considered private. The self-described “sex positive” representative has defended his habit of liking and commenting on both risque and pornographic posts via his personal Twitter account.

Did @DiegoforAZ ever hear back from @halsey?

Certain Republican elected officials and candidates had a different take on the situation.

Congressman Andy Biggs (R-AZ-05) stated in an interview with The Conservative Circus that the LUCHA activists were examples of how society functions in a totalitarian regime.

“I think what she’s doing is principled. I think it’s what she believes in, and she’s getting the crud kicked out of her by her own party, and they’re spending millions to try to embarrass her,” said Biggs. “You’ve got these yo-yos on ASU’s campus that are chasing her into the bathroom while she’s in a stall to harass and harangue her while she’s there. I mean, that’s the kind of thing that goes on in totalitarian regimes. I mean, that’s really what it is: they’re trying to ostracize her and browbeat her. But I’ll tell you what, I know few people who are tougher than Kyrsten Sinema. I’m hopeful that she’s going to hold out on her principles.”

The bathroom incident wasn’t the first time that LUCHA activists confronted Sinema over these last few days. They disrupted a private fundraising event in Royal Palms Resort and Spa in Scottsdale on Saturday. As stated earlier in this report, the illegal immigrant Ruiz de Diaz confronted Sinema on a plane.