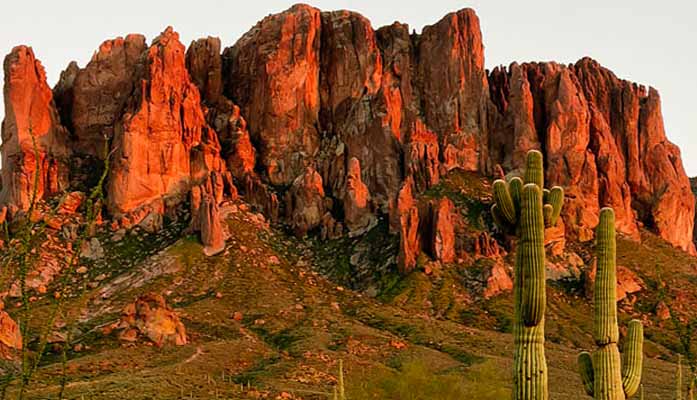 While COVID-19 damaged much of the state’s tourism for most of 2020, the Arizona State Parks and Trails still managed to pump $272 million into the state and local economies during Fiscal Year 2020, according to a report released last week by Gov. Doug Ducey’s office.

“Arizona’s state parks are second to none! In addition to their unbeatable views, recreational activities and family-friendly opportunities, they have a significant impact on our state economy,” Ducey tweeted on Sept. 30.

The 82-page report about the economic contributions and impacts of the state’s 21 parks, 10 historic parks, and 3 natural areas covers Oct. 1, 2019 through Sept. 30, 2020. The data comes from the Arizona State Parks and Trails in collaboration with the Regional Economic Analysis Program at the University of Arizona and the Hospitality Research & Resource Center at Northern Arizona University.

The economic contribution of spending by nearly 3,000,000 visitors in and around Arizona’s 34 state park properties was $449 million, including multiplier effects. Of that, $272 million was counted toward Arizona’s gross state product, supporting 4,173 jobs statewide.

Included in the report are details about how Arizona State Parks impacts the 13 counties home to at least one state park.  Yavapai County has seven state parks -the most in Arizona- while Pinal and Santa Cruz each have four. Greenlee and Maricopa are the only counties with none.

According to the report, most state parks stayed open during the pandemic, but temporary closures were implemented at Kartchner Caverns and the 10 historic state parks as a safety precaution. The closures caused visits at those locations to plummet 50 percent from FY2019, but combined visitors to the other state parks resulted in a net one percent increase compared to 2019.

Lake Havasu State Park in Mohave County counted the most visits at 533,757 in FY2020.  In fact, the report found the top five most visited parks accounted for 53 percent of the total statewide total.

Visitor counts at Kartchner Caverns State Park and the Tombstone Courthouse State Historic Park, the two state parks in Cochise County, took especially harsh hits during FY2020 due to mandated temporary closures. The parks saw a combined 161,010 visitors, down significantly from the nearly 220,000 visitors the year before.

When averaged out, the visitor count across the system declined 7.6 percent. The majority of the visits occurred in the first six months of the fiscal year before COVID-19 shutdowns occurred across the United States.

As part of the state’s post-pandemic recovery efforts, Ducey has focused on promoting the benefits of Arizona’s park system for its relatively safe and inexpensive outdoor options.

The report released by the governor’s office also highlighted the growth in popularity of Arizona State Parks from FY2014 when 2,310,349 visitors were counted, to 2,971,844 visitors in FY2020. And the spending by non-local visitors during that same period increased by 20 percent.

In July, Ducey announced $20 million in American Rescue Plan federal funding was being earmarked for capital improvements at various parks.  Another $5 million will be spent with the State Parks Heritage Fund for new open space development, restoration or renovation projects, historic preservation, and outdoor education program.