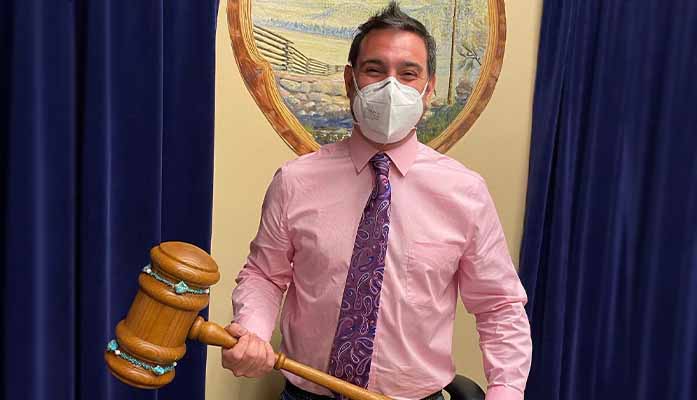 Flagstaff Mayor Paul Deasy tweeted the “WTF” acronym on Saturday to inform visitors they needed to mask up. No expletives were used. Rather, the mayor explained the acronym stood for “Welcome To Flagstaff” and encouraged people to “Wear The Face mask.”

Though face masks are still required in public transportation and government buildings, even for the fully vaccinated, the citywide mandate ended late May. The public mask mandate was put in place nearly a year prior in June.

AZ Free News inquired with Deasy’s office why the mayor chose to use the controversial acronym to relay COVID-19 safety guidance. They didn’t respond by press time.

This isn’t Deasy’s first foray into posts of this caliber concerning COVID-19. In July, the mayor tweeted what appeared to be a sexual innuendo about the potential connection between COVID-19 infection and lasting erectile dysfunction.

“Don’t let Covid get you down. Get vaccinated!” wrote the mayor.

Don’t let Covid get you down. Get vaccinated! https://t.co/WDB75ISJtM

Last month, the Flagstaff City Council expressed their displeasure with Deasy’s public criticisms of them. Deasy had given the council members a 24-hour notice for a special meeting. However, four council members were representing Flagstaff at the League of Cities and Towns Conference in Phoenix and were unable to attend.

Deasy characterized the council members’ absence as willful negligence and a flippant disregard for responsibility and constituents, though the Phoenix conference is an annual affair planned on months in advance.

Vice Mayor & Councilmembers Salas, Sweet, & Aslan were no-shows to our meeting on Covid wastewater early warning system, so meeting cancelled. Public health & safety of teachers & children should be top priority. Unfortunately, some electeds can’t bother to show up for discussion

Councilman Austin Aslan responded to Deasy with criticism over the mayor’s leadership skills and professionalism.

I can’t just sit on this and not shine a light on it. Here is the Flagstaff mayor on Instagram, repeating, on yet another platform, his baseless smears of fellow Councilmembers. Seriously, I implore you, who does this when they’re in a leadership role? This defamation is so embarrassing it makes me sick to my stomach. I have been one of Flagstaff’s strongest advocates for Covid restrictions, spanning two Councils. How does this mayor sleep at night while deliberately throwing my irrefutable record on pandemic mitigation under the bus? This is so disingenuous. To me, it feels insidious. I was literally driving through a remote portion of I-17 at 6pm on Tuesday. Shame on Paul for blindly insinuating I was at a dinner party. Also: I strongly suspect that both Councilmembers Shimoni and McCarthy are furious that they’re being used as bricks in the mayor’s toxic game, but that’s for them to confirm. Paul Deasy already admitted once this year that he ‘did not befit the honor of his position’ while unfairly impugning a local non-profit director. He truly ought to resign over this. But I’ll leave it there. You be the judge. If you’re troubled too, please share this. These attacks cannot continue in the shadows.

Deasy never issued a statement to responses from council members.