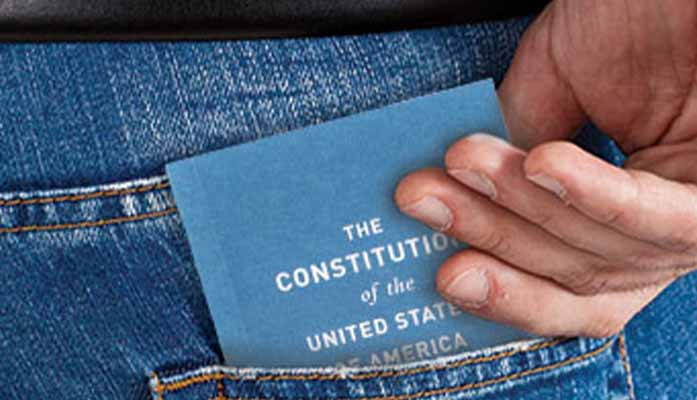 In These Times, We Need Our Constitution More Than Ever


These are fraught days for Americans. History is said to be cyclical but there is widespread concern that we are in inexorable decline.

Our leadership role in the world which seemed secure three decades ago is under serious threat. Polls show that confidence and love of country are in decline, especially among the young. Traditional American values like freedom of speech, free-market economics and responsible fiscal policy are openly attacked.

Meanwhile, e pluribus unum is facing replacement by a culture obsessed with racial identity. MLK’s dream of a society where skin color doesn’t determine our judgments of each other is now itself deemed racist.

America, though, is the longest running liberal democracy in history for a reason: our Constitution. Our great freedom document connects us to our roots, the sources of our strength. It can direct us away from hyperpartisanship toward mutual respect and agreement on shared principles – if we respect its authority.

But the Constitution has been repeatedly ignored and abused in our recent history. Many argue it is an 18th-century construct unsuited to governance in the 21st-century. Others claim it should be seen as a “living” document that means whatever someone says it means without regard to its actual content.

Since the Constitution prescribes limits on governmental powers, it particularly vexes Big Government types wishing to centralize power and enlarge their span of control. For example, a century ago President Woodrow Wilson was an early leader of the Progressive movement, which held that modern government should be guided by administrative agency experts.

Wilson thus opposed the separation of powers doctrine. He cautioned against “the error of trying to do too much by vote“, given the ignorance of the common man.

His legacy of disdain for the Constitution is reflected in today’s administrative state, in which unelected bureaucrats make binding rules (laws), direct the enforcement of those rules and adjudicate violations.

FDR later also regarded the Constitution as a problematic document requiring workarounds for him to be successful in establishing the social welfare programs and regulations thought necessary to rescue America from the Great Depression. He was so frustrated by the Supreme Court striking down his unconstitutional power grabs that he infamously tried to expand the court to15 members.

Roosevelt was temporarily rebuffed but eventually was able to secure so much of his agenda that the role of government in Americans’ everyday lives changed dramatically. Safeguards to liberty like enumerated powers and federalism suffered permanent damage.

Recent presidents have taken the constitutionally curious position that they should be permitted to exceed their normal powers when Congress won’t act as they prescribe. Barack Obama, a former constitutional law professor, correctly stated many times that he wasn’t authorized to suspend DACA deportations through executive order. There were “laws on the books“ and “I am not king“, he pointed out.

But he eventually caved, unilaterally granting work permits and legal status to first millions of illegal immigrants who entered as minors, then later to adults (later struck down). The legal fate of DACA is still pending, despite its continuing unconstitutional status.

Joe Biden used the same logic when confronted with the need for extension of the eviction moratorium passed as an emergency pandemic measure by the Trump administration.  Biden acknowledged that the Supreme Court had already ruled that an extension would require congressional approval. But to appease his party’s lefties, he did it anyway, expressly ignoring the Constitution.

Donald Trump was also loathe to let the constitution interfere with what he wanted to do anyway. His most egregious transgression was pressuring Vice President Pence to reject the electoral ballots lawfully submitted by the states in the 2020 presidential election.

Pence, clearly lacking the constitutional authority to do so, refused. Fortunately, unlike previous miscreants, Trump was so thoroughly rebuked that no precedent for similar actions was created.

Part of the reason America is in trouble is because we are not protective of our Constitution, not outraged when it is abused. Judicial nominees, charged with upholding the Constitution, are vetted instead based on their political agenda.

We demean our constitution at our considerable risk. It is our bulwark against the corruption and chaos that plague impoverished nations around the world.