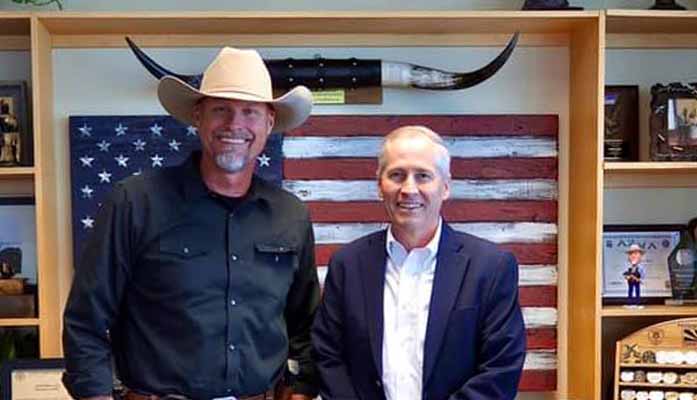 A former justice of the Arizona Supreme Court who used to prosecute cross-border criminals before becoming a judge says many Arizonans along the border feel abandoned by President Joe Biden, but he has an idea to help stop the influx of undocumented immigrants and smugglers coming into the state.

During an interview with KFYI’s James T. Harris on Thursday, Andrew Gould agreed with a recent assessment by Cochise County Sheriff Mark Dannels that the situation at the border is out of control, but the crisis “is far, far worse than you could imagine,” he said.

“We’ve created an open border, and the Biden Administration has essentially abandoned American citizens just like he did with Americans in Afghanistan,” Gould said.

Gould told Harris that there are options for making Arizona unattractive to those illegally entering the United States via Arizona. The options could be undertaken without the help of federal authorities such as the U.S. Customs and Border Protection and U.S. Border Patrol, which get their orders from Biden.

One option which Gould believes can be easily implemented is establishing a No Trespass Zone from Cochise County to Yuma County on state and private lands along the 325 miles of border between Mexico and Arizona.

According to Gould, Arizonans are now “at the mercy of these cartels who are making billions of dollars off crime. They are pushing illegal immigration, fentanyl, methamphetamine, sex trafficking, extortion, murder, bribery.  And there‘s no help for us coming from the federal government.”

The answer, Gould believes, is for local and state officials to join with property owners to post no-trespassing signs on private property and state land.  The signs are necessary to satisfy the “reasonable notice” requirement in state law before anyone can be arrested for criminal trespass.

Gould brings a unique perspective to the subject, as a one-time prosecutor for Maricopa and Yuma counties where he handled major felony cases. He went on to serve as a judge with the Yuma County Superior Court and the Arizona Court of Appeals before being appointed to the Arizona Supreme Court by Gov. Doug Ducey in 2016.

The appointment as a supreme court justice came with a practically guaranteed seat on the bench until age 70. In fact, Gould was retained by voters in the November 2020 General Election for a six term.

But in April, the 57-year-old Gould shocked court watchers when he stepped down to run for Arizona Attorney General, who is not only Arizona’s top prosecutor but also its top legal advisor to dozens of state agencies. With illegal immigration and drug / human smuggling among the biggest legal challenges facing the state, Gould says Arizonans cannot wait on the Biden Administration to address the public safety, public health, and environmental harms posed by an uncontrolled border.

A no-trespassing zone is something Gould has discussed with border sheriffs, including Dannels and Yuma County Sheriff Leon Wilmot. Both expressed interest in the idea, he said.

A conviction for misdemeanor criminal trespass can carry a jail sentence of 30 to 180 days. Most non-U.S. citizens would be ordered held in custody pending resolution of the charges, so Gould says Arizona’s county jails would need financial support to handle the increased incarceration costs.

One option, he noted, is to aggressively target Cartel assets to help with the expense.