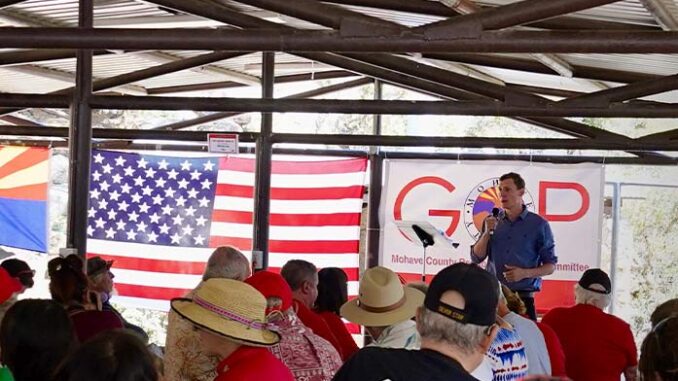 Blake Masters reported that he’s managed to outraise his opponents entire first quarter showings – in one single month. The COO of the tech investment firm Thiel Capital and president of the Thiel Foundation made the announcement in a press release Friday.

Masters reported receiving over $507,000 in contributions, though the Federal Election Commission (FEC) doesn’t have his numbers published yet. Others vying for the Republican slot – Arizona’s current Attorney General Mark Brnovich, solar power businessman Jim Lamon, and former Arizona National Guard Adjutant General Michael McGuire – raised about $70,000 to over $250,000 less in their entire first quarter according to the FEC. In his first quarter, Brnovich raised $438,000.

The Senate hopeful credited his bulk of supporters – namely, first-time donors – for making this surge in campaign contributions possible.

Masters acknowledged that money shouldn’t be everything, but asserted that incumbent Senator Mark Kelly (D-AZ) would raise hundreds of millions to win this race. He noted further that he must be doing something right because “the Left” is attacking him primarily.

“Money isn’t the only thing in politics, but unfortunately, without it, you’re toast,” said Masters. “Mark Kelly and the Democrats are going to raise more than $100 million to try to keep this seat. Republicans need a nominee who can bring new energy, new voters, and new donors to the fight.”

Masters asserted that this pattern of donations is proof that constituents are tired of “cookie-cutter politicians.” He says their money is proof of where their vote lies.

“I raised more $ in my first month than my opponents did in their entire first quarter,” said Masters. “More proof that people are tired of cookie-cutter politicians. We need new energy in order to take this country back!

The latest polls don’t reflect where Masters lies with voters; he entered the race almost one month ago to date.

Masters has the backing of fellow Thiel Capital higher-up, founder and tech billionaire Peter Thiel, who is currently backing GOP candidates in other states such as Ohio’s Senate hopeful and bestselling author of “Hillbilly Elegy,” J.D. Vance.