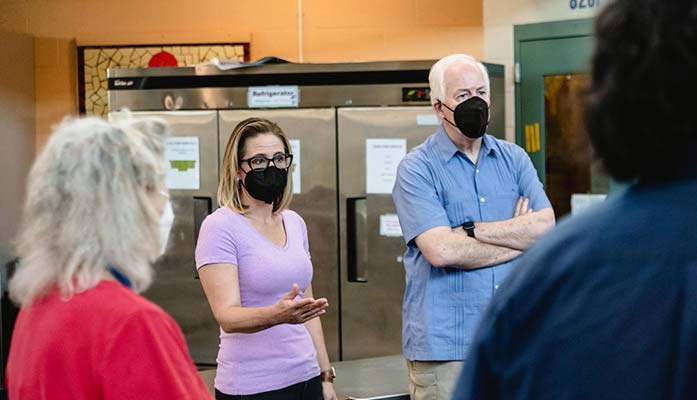 On Tuesday, Sen. Kyrsten Sinema was joined by Sen. John Cornyn of Texas on a tour of two facilities housing migrants in Tucson. Sinema and Cornyn will be in Texas today.

Sinema and Cornyn received a tour of the U.S. Customs and Border Protection’s “soft-sided facility” in Tucson, which is used to house migrants apprehended by Border Patrol.

Cornyn and Sinema then visited the Casa Alitas shelter. The senators received a briefing from Casa Alitas staff. Casa Alitas is operated by Catholic Community Services.

Cornyn, Sinema and U.S. Representatives Henry Cuellar (D-TX-28) and Tony Gonzales (R-TX-23) in April introduced The Bipartisan Border Solutions Act, their bipartisan, bicameral legislation to respond to the surge in migrants coming across our southern border.

The sponsors say the bill would “improve both the Department of Homeland Security’s and the Department of Justice’s capacity to manage migration influxes and adjudicate asylum claims in a timely manner, protect unaccompanied migrant children, reduce impact on local communities, ensure migrants are treated fairly and humanely, and ultimately deter those who do not have realistic asylum claims from placing themselves in danger by making the treacherous journey to our southern border.”