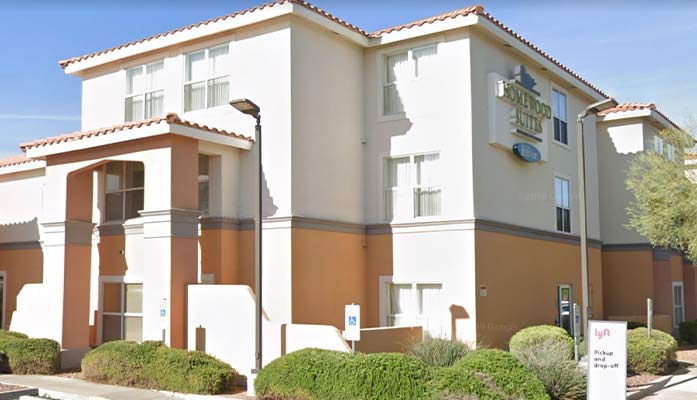 Scottsdale Migrant Hotel Answers the Phone as ‘The Suites’


The Scottsdale hotel converted into a migrant shelter seemingly overnight several weeks ago still has a working number – and the operator on the other end answers for “The Suites.” The facility has been closed to the public since May 24 to award short-term, emergency lodging to migrant families that ICE classified as “political asylum refugees.”

A woman answered, identifying the facility as “Suites on Scottsdale.” We asked if the facility was still the Homewood Suites.

“No ma’am, it is not. It is the Suites on Scottsdale,” said the operator.

We then placed a second call to the facility, but the operator never answered – and the mailbox was full.

It is unclear whether the facility is still using software associated with Homewood Suites, and if the current usage of the facility and systems is in line with the franchise agreement and Scottsdale zoning codes.

As AZ Free News reported, the facility is currently being operated by Family Endeavors, an organization awarded a no-bid contract by the Biden Administration shortly after the border crisis erupted.

The current website for the facility identifies it as the “Suites on Scottsdale.” All of the links for contacting the facility and booking a reservation were intact, at the time of this report. However, all of the rooms were listed as “Not Available” for the rest of the year.

ICE spokespersons didn’t tell AZ Free News why the surrounding communities weren’t given advance notice of the shelter being established. They also didn’t answer our question regarding how many other similar migrant hotels were established in the area. However, ICE did tell Senator Kyrsten Sinema (D-AZ) that they’d established similar shelters in Chandler and Phoenix.