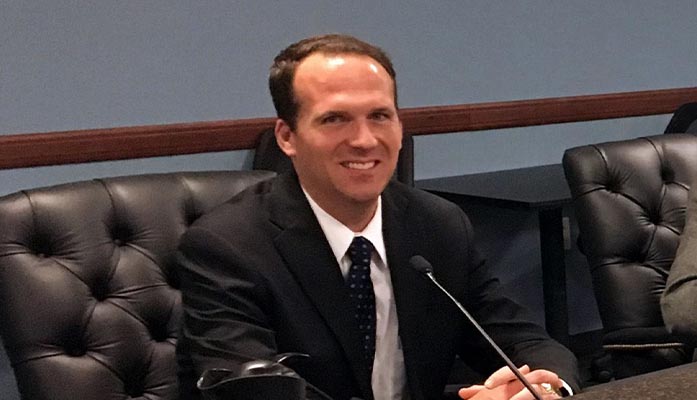 Justin Olson says news reports that he is against getting Arizona’s electric utilities to a carbon-free or net-zero carbon level are incorrect. He whole-heartedly supports that goal, Olson insists, but believes it is more important to ensure Arizonans who pay for that electricity do not end up paying higher rates to reach the goal.

Olson is one of five members of the Arizona Corporation Commission, and one of three Republicans. He was joined last Wednesday by the ACC’s two Democrats in voting down a rules package which urged all electric utilities to a net-zero carbon level by 2050, but not mandate the goal.

The vote came nearly six months after the ACC -with a slightly different contingent of commissioners- voted 4 to 1 on a draft set of rules that included the net-zero by 2050 mandate. It had taken ACC staff and industry representatives about three years to get those rules worked out.

Olson cast the lone nay in that November vote.  And he then voted nay last week even after he introduced an amendment to make the whole thing more palatable by switching the mandates to guidelines.

In the end, Olson says he could not get language into the rules to prevent utilities from using the mandates -or guidelines- as a justification for a rate increase to pay for something the company intended to do anyway. And that left customers at risk of paying more.

Olson insists that complaints directed toward any commissioners for “wasting” the time of ACC and industry staff are misplaced.

“The utilities would have undertaken all of that review and study anyway,” as part of determining their own future business plans, Olson told AZ Free News.

In fact, Arizona Public Service (APS) released an Integrated Resource Plan update for shareholders in February which listed its clean energy commitment for 100 percent “clean, carbon-free electricity” by 2050. Olson noted that the company’s plan was made without any regulatory mandate in place.

Olson also pointed out the “overwhelming” voter rejection of Proposition 127 in 2018 which sought to amend the Arizona Constitution to require nongovernmental electric utilities to increase the portion of their retail energy sales from certain types of renewable energy resources to 50 percent by 2030.

Refusing to support any type of renewable energy mandate without protecting ratepayers was simply “respecting the will of the voters,” says Olson. And that, he believes, means the ACC should be working to ensure ratepayers are charged lower rates in the future if utility companies benefit from lower costs by their own business decisions to use more renewable sources.

Some opponents of Olson’s position worry the Biden Administration will push Congress to pass legislation which may set net-zero mandates that do not serve the interest of Arizona’s utilities or its electricity users.

Olson says he understand that concern, but to preemptively enact “a bad policy” would be irresponsible given “there is no harm or penalty to Arizona the utilities, or the ratepayers at this time.”