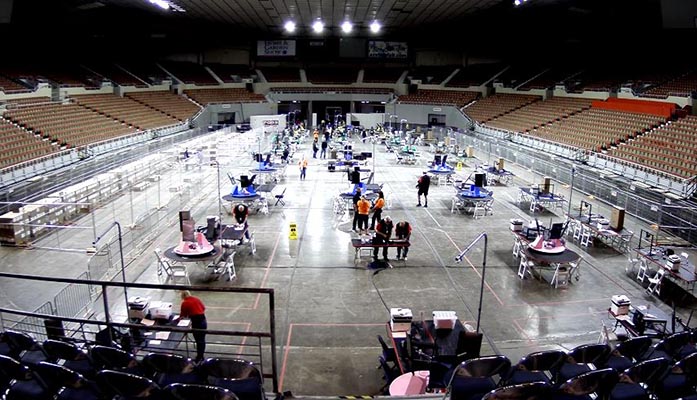 Two judges, one from Maricopa County and the other an Associate Justice of the Arizona Supreme Court, agreed Friday that the Senate Audit of Maricopa County’s 2020 General Election can move ahead for now. Both judges also ordered the parties to submit several court filings in the coming days.

Several hundred of the nearly 2.1 million ballots cast by Maricopa County voters were audited Friday and Saturday. The volunteer counters are looking only at the race for U.S. President and the contest between Mark Kelly and then-Sen. Martha McSally.

For a short time Friday it looked like no audit activities would take place after Judge Christopher Coury of the Maricopa Superior Court agreed to issue a stay requested by the Arizona Democratic Party and Steve Gallardo, the only Democrat on Maricopa County’s five-member Board of Supervisors.

But the stay order was contingent on the plaintiffs posting a $1 million bond in the event they lost their case. AZ Dems chair Raquel Teran announced Friday afternoon that no bond would be posted, meaning the audit can continue unimpeded, for now.

Two other orders issued by Coury are currently in force: that the Senate and its contracted audit team comply with state law and that no blue or black pens can be on the floor of the Veterans Memorial Coliseum where the audit is being conducted.

Coury will be a key player in the audit this coming week, as he ordered the parties back to court Monday morning for an evidentiary hearing on the merits of the lawsuit. The judge set several deadlines for the attorneys, including an order for the audit’s written policies and procedures to be filed by the Senate and general contractor Cyber Ninjas on Sunday.

Teran and Gallardo -who says he joined the lawsuit in his personal capacity as a Maricopa County voter- must decide how far they want to push their allegations about the audit operations, given the fact Senate President Karen Fann and the other defendants have petitioned to the Arizona Supreme Court, which has also ordered a series of legal briefings in the case.

Fann and Sen. Warren Petersen of the Senate Judiciary Committee are named as defendants along with former Arizona Secretary of State Ken Bennett who is serving as the Senate’s audit liaison. The other defendant is Cyber Ninjas, the company Fann contracted with to conduct the audit with help from three subcontractor.

The Senate defendants are represented by Kory Langhofer and Thomas Bastille, who have been involved in several of the election-related lawsuits filed since Nov. 3. Florida-based Cyber Ninjas and its owner Doug Logan have retained Phoenix attorney Alex Kolodin as their Arizona legal counsel.

Another key player is Associate Justice Clink Bolick of the Arizona Supreme Court, who affirmed Coury’s earlier orders during an emergency conference Friday afternoon. Bolick set separate deadlines for the Senate’s challenge to the legality of the lawsuit, with all those filings needing to be in by the end of business April 29.

Participating in the emergency conference with the justice was attorneys for Arizona Secretary of State Katie Hobbs, who has pushed back on Fann’s previous assurances that the Senate’s audit would be “independent” and “transparent.”

Hobbs has pointed to Rep. Mark Finchem’s admitted role with the audit in light of his repeated insistence that President Joe Biden really did not win the popular vote in Arizona, and thus was not entitled to the state’s electoral votes.  She also wrote to Attorney General Mark Brnovich with concerns that auditors may not be complying with Arizona’s Elections Procedures Manual (EPM).

For his part, Brnovich was the first prominent Republican to insist after the general election that there was no fraud involved in Biden’s victory. He replied to Hobbs on Friday, suggesting she notify his office when she has “credible facts and not conjecture or politics” for him to investigate.

Another player who could impact next week’s audit operations is First Amendment attorney David Bodney, who warned Fann and Bennett that the audit team’s current refusal to allow journalists to report on audit activities from the main floor of the Veterans Memorial Coliseum.

Bennett, as the audit liaison, is requiring media representatives to sign up for a six-hour shift as an observer. However, observers are prohibited from having cellphones or even pen and paper on the floor.

“Requiring journalists to become active participants in the events on which they seek to report is as unprecedented as it is untenable in a representative democracy,” Bodney wrote. “It also violates the First Amendment, which compels that members of the press be allowed access to report on these public proceedings. “

Bodney also warned that legal action could be forthcoming.

“By making the proceedings accessible to some journalists, you cannot arbitrarily deny access to others or require that others satisfy peculiar conditions not imposed upon those whom you favor,” he wrote. “In the event the audit proceeds while barring the press, we are committed to pursuing all legal remedies we deem appropriate to secure our clients’ rights under the First Amendment,” Bodney said