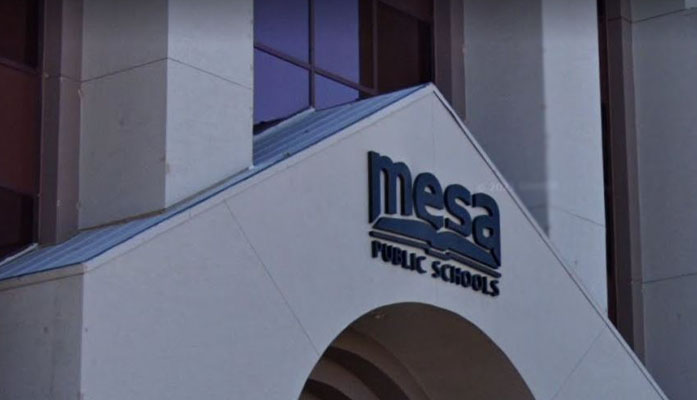 The Vail School District abruptly cancelled its Tuesday night board meeting after nearly 200 people showed up to push for an end to the district’s mandatory mask policy for staff, volunteers, and 13,500 students.

Deputies with the Pima County Sheriff’s Department were called to the Vail Education Center when dozens of people refused to leave the building once the meeting was cancelled. Officials noted that the crowd exceeded the building’s adjusted COVID-19 occupancy limit and the majority of the attendees refused to abide by the district’s mask-wearing and social distancing policies.

Some among the crowd then decided to elect a new school board based on nomination offered and a vote taken right in the lobby of the building. The first act taken by the “new board” was to do away with the mask mandate.

Several participants claim the election was legal due to the fact they followed Robert’s Rules of Order. However, several attorneys have come forth to point out Arizona has strict open meeting laws and election laws, thus making whatever vote took place Tuesday night irrelevant.

But while the Vail District’s board meeting never got started Tuesday night, the governing board of the state’s largest district heard argument for and against its plans to phase out mask mandates in the coming days.

Mesa Public Schools announced the mask phase-out shortly after Gov. Doug Ducey rescinded his executive order which had required the wearing of masks for its staff, volunteers, and 63,000 K-12 students. Masks are current strongly recommended” but not required for students when they are outdoors, but are mandatory on school buses and all school facilities including gyms.

District officials will announce Friday whether the mask mandate will be dropped next week on Mesa buses. In the meantime, staff continue to promote physical distancing and personal hygiene practices despite the fact current district COVID-19 policies are more restrictive than those being recommended by many in the science and medical communities.

The Maricopa County Public Health Department “strongly recommends the use of face coverings” by students and staff in schools and on buses or other public transportation, according to its website, but does not mandate such use. Those policy decisions “will be made by the local school or school district authority,” according to the department.

A board meeting of the Dysart School District in Surprise also experienced a larger than usual turnout for its Wednesday night meeting. At one point district personnel locked the doors from the outside to stop people from entering the building when occupancy and social distancing capacities were met, and local police officers provided security.

One school board attorney told AZ Free News that knowingly allowing more people into the building than legally allowed puts district officials and employees at risk of being held personally, even criminally, liable if anyone is injured.

That appears to be one of the reasons behind the Tanque Verde Unified School District’s cancellation of its Wednesday evening board meeting after reports that a similar mask “protest” was planned. A statement from the district announcing the cancellation noted officials first conferred with the Pima County Sheriff’s Department before determining the district would “be unable to conduct the meeting safely.”

With district officials from Vail to Tanque Verde to Surprise and beyond aware of reports of future the mask-mandate protests, the question is whether they will move their public meetings to larger venues, such as cafeterias and gymnasiums, instead of cancelling meetings.

Since Tuesday night, nearly 100 parents in the Vail District have used social media to express their frustration about losing the opportunity to express their opinion to the board.  At the same time, others wrote of concern that so many parents lack a basic understanding of how school districts are governed.

They say that lack of awareness makes those less-informed parents vulnerable to manipulation by people from outside the district who have political agendas. And they point to self-identified members of the upstart Patriot Party of Arizona who do not live in either Surprise or Vail who posted about their involvement in trying to force entry into those board meetings.