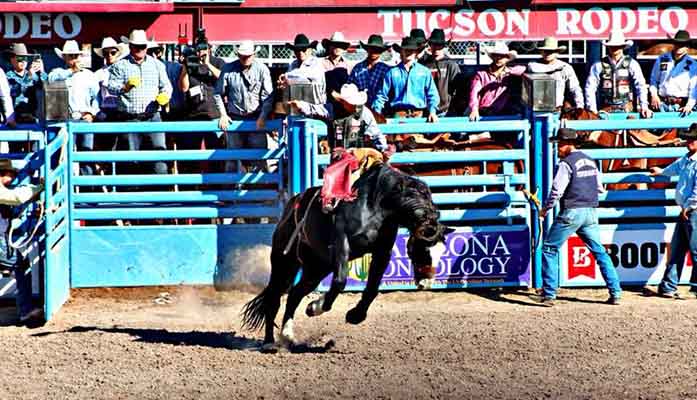 Fans of the western rodeo will have a new way to express their interest now that Gov. Doug Ducey has signed a bill which creates a license plate supporting the popular sport.

But the governor’s approval of the legislation does more than add another designer license plate to ADOT’s stock. It also provides funding to help support a rodeo museum which highlights Arizona’s rich history in the sport.

And that, according to supporters, will provide Arizonans as well as domestic and international tourists another source of entertainment.

The oldest organized professional rodeo in Arizona pre-dates statehood, with the July 1888 event in Prescott. And every February, southern Arizonans turn their attention to the Tucson Rodeo Parade.

The special rodeo plates can be issued for $25 plus the normal vehicle registration fees. Of that amount, $17 is considered an annual donation to the Rodeo Special Plate Fund administered by ADOT.

But before ADOT can formally begin issuing the special rodeo plates, someone has to pony up $32,000 to ADOT before Dec. 31 of this year to implement the program. And that person is responsible for designing the plate, subject to ADOT rules and approval.

ADOT can annually hold back 10 percent of the Rodeo Plate Fund as an administration fee, but the rest must be allocated each year to an Arizona-based 501(c)(3) charitable organization which awards collegiate scholarships and supports a museum in Arizona that has rodeo artifacts.

The new statute specifically requires that the museum’s artifacts must date back to at least 1953. And the museum must include saddles ridden by “famous rodeo champions” among its artifacts.

A review of museums across Arizona reveals that the Scottsdale Rodeo Museum website boasts “rodeo artifacts going back to at least 1953, including saddles ridden by famous rodeo champions such as Jake Barns.” It is unclear whether the more well-known Tucson Rodeo Parade Museum would meet the specific funding criteria.

The bill cleared the House in February on a 39 to 20 vote, then passed out of the Senate on April 13 on a 27 to 3 vote. Ducey signed the bill sponsored by Rep. Joseph Chaplik (R-LD23) last week.