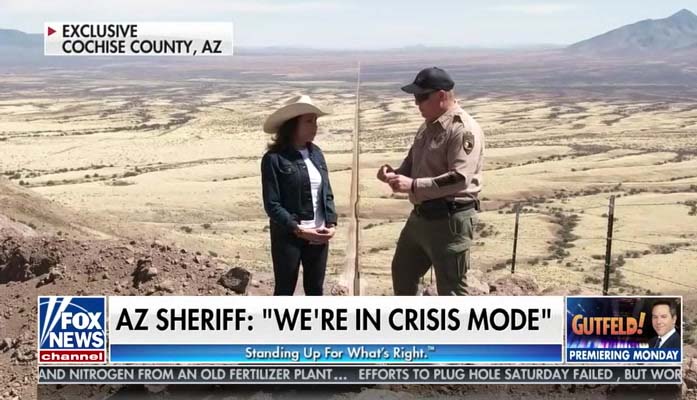 Mayorkas is scheduled to visit with law enforcement officials and tour facilities in El Paso and McAllen. Among those invited to discuss the immigration crisis along the country’s 1,900-mile southwest border will be Dannels, who serves as chairman of the National Sheriffs’ Association’s border security committee.

The group, Dannels told AZ Free News, is striving “to bring collective resolutions and answers to our border security issues.”

Cochise County shares an 83-mile stretch of the international border. It was Dannels’ experiences with drug and human smuggling that prompted then-Secretary of Homeland Security Kirstjen Nielsen to swear in the sheriff on the Homeland Security Advisory Council in 2018.

But last month, Dannels was one of 32 HSAC members fired by Mayorkas, leaving just three members in place. Dannels says he plans to bring a letter to hand deliver to Mayorkas addressing the sheriff’s thoughts about HSAC, which the secretary has said will be reformatted in the coming weeks.

“I hope all stakeholders will have a better understanding with some defined objectives to work toward as we promote collaboration,” Dannels said, adding the current border situation “is more important than me and my appointment.”

Dannels has been outspoken about the Biden Administration’s lack of coordination and communication with local officials concerning the surge of undocumented immigrants coming into the United States. He is also being suggested as a possible Republican candidate for U.S. Representative when Ann Kirkpatrick seat comes open with her retirement in 2022.

On Tuesday, Dannels was involved in a vehicle pursuit which led to the arrest of three men on a residential property in Hereford. One of the men was a Phoenix resident suspected of transporting two illegal immigrants for financial gain.

According to the Cochise County Sheriff’s Office, deputies were alerted to a possible human smuggling incident south of Sierra Vista around 3 p.m. A vehicle description was provided along with a license plate number.

Dannels was the first to locate the vehicle “travelling well over the posted speed limit for that area,” a CCSO statement reads. “Sheriff Dannels and a second Deputy conducted a traffic stop near Three Canyons and Highway 92, however as they approached the vehicle the driver sped away from the scene heading north on Highway 92.”

A short time later the occupants of the truck exited the vehicle near a residence. Dannels and his deputies were assisted by Arizona Department of Public Safety and the U.S. Border Patrol to apprehend the men without injury, although one of the men attempted unsuccessfully to climb up to a second floor balcony of the house, losing his shoes in the process.

“Initial interviews of the apprehended suspects revealed that two of the men were undocumented immigrants who were identified and released to US Border Patrol, while the third man without the shoes was identified as a US citizen and the driver of the vehicle,” the statement reads. That third man was Dustin Howerton, 23, of Phoenix.