The state of California will no longer fully fund official travel to Arizona because of laws banning gender transition procedures for minors (SB1138) and biological males from female sports (SB1165). The West Coast state’s attorney general, Rob Bonta issued the announcement on Thursday, the eleventh hour of Pride Month 2022.

California’s wielding of a 2016 law also applies to Indiana, Louisiana, and Utah, for their respective laws banning biological males, who believe they are transgender females, from participating in girl’s and women’s sports.

Bonta claimed in a press release that protections for women and children were solutions in search of a problem. Rather, Bonta asserted that the laws were veiled attacks on transgenderism and that the state would be “putting [its] money where [its] values are.”

“Make no mistake: There is a coordinated, ongoing attack on transgender rights happening right now all across the country,” said Bonta. “Blanket legislation targeting transgender children is a ‘solution’ in search of a problem. It is detached from reality and directly undermines the well-being of our LGBTQ+ community.”

Later on Thursday, Bonta issued a several statements commending members of his staff within the LGBTQ+ community, including his deputy attorney general Lily Weaver, a man who identifies as a “lesbian transgender millennial woman.

A contentious bill to enshrine a critical race theory (CRT) ban in the state constitution, HCR2001, passed the Senate Appropriations Committee on Tuesday. No committee Democrats spoke up during their vote, save for one who repeated the same claims made by her party: that CRT tenets were not only supportive of historical fact but critical to K-12 education.

State Senator Raquel Terán (D-Phoenix) said that CRT properly informed children of both the good and the bad of American history. Terán shared that she taught her kindergartener son about the “ugly truths” of this nation’s racial relations with Latinos as a supplement to what he’d learned in school during Black History Month.

“Every child deserves an accurate and honest and quality education no matter the color of their skin or where they call their home,” said Terán.

State Senator Vince Leach (R-Tucson) cited an AZ Free News report of how over 200 Arizona teachers pledged to teach CRT regardless of what the law or school board determined.

“To some degree, I commend them because they signed up and said the truth. Anyone in this room that thinks K-12 education is gaining kids would be mistaken. We’ve lost 40,000 kids [from public schools] through COVID. And they’re not coming back. There’s a reason they’re not coming back. Parents are pulling their kids left and right. Just check your emails, or if you don’t get those emails, talk to me,” said Leach. “And yes, there are spots in our history that are blemished. Some would even go so far, and maybe I would be included, that they are rotten [spots]. And as we see them we take care of them. Granted, not soon enough, but we are a deliberative country set up by our founders and we don’t do things quickly. That annoys people on both sides.”

Goldwater Institute Director of Education Policy Matt Beienburg cited studies that teacher candidates have been screened on their beliefs of CRT tenets as part of their qualifications to teach.

After the vote, State Senator Kelly Townsend (R-Mesa) dispelled a rumor that the resolution would ban educators from teaching specific parts of hard, “ugly history.” She bemoaned that her Democratic colleagues were accusing Republicans of thwarting efforts to teach history.

“What it does say is that you can’t teach that one race or ethnic group is inherently, morally, or intellectually superior to another race. Cause that’s racism,” said Townsend. “If you could sum this up, it says that you can’t teach racism. You can’t be racist in the way you teach. It doesn’t say that you cannot teach history. Every year it seems like now we’re going through this, where we’re being accused of trying to stop kids from learning our history. That is not the case. We are saying that you cannot guilt a kid because of the color of their skin. You cannot say one race is better than the other. I’m growing weary of it, and I would like some honesty in our discussions, especially from what we’ve heard today. It’s pretty shameful, and if that’s what we’re doing is saying that this bill is about denying history, then I think we need to look at the language of the bill.”

Legislation banning critical race theory (CRT) was switched out with a bill to offer corporations a tax break in what may be a welcome respite from the lasting effects of the 2020 pandemic. State Representative Michelle Udall (R-Mesa) championed original legislation banning CRT from K-12 schools, which passed the House last month. Then last week, the Senate Finance Committee erased it all with a strike-everything amendment to instead offer a $4 million tax break for corporations.

Now, HB2112 requires the amount of any federal deposit insurance corporation premiums that are disallowed as a deduction for federal income tax purposes to be subtracted from a corporation’s gross income in this state. Senate Finance Committee Chairman David Livingston (R-Peoria) introduced the striker.

“This will benefit small Arizona banks the most,” claimed Livingston.

Udall didn’t speak on the bill during the committee hearing after the striker was announced. Nobody offered an explanation as to why the CRT bill was done away with, or who caused its demise. AZ Free News reached out to Udall and Livingston with these questions; they didn’t respond by press time.

An Arizona Bankers Association spokesman explained that the bill was necessary because the state failed to decouple its tax cut from changes to the federal tax cut in 2019. Livingston noted that failure to establish the tax cut put Arizona at a competitive disadvantage to other states.

A previous version of the bill failed to pass the Senate Ways and Means Committee. This time around, the amended bill was approved without discussion.

Apparently, parents didn’t get the memo that the CRT ban was no longer in question. Several mothers in support of the bill signed up to speak on the bill; one mother began to speak, only to be informed by Livingston that the bill no longer existed.

A different bill may be the reason for the original HB2112’s eradication — this one, a resolution that would have voters decide whether the state constitution should ban any individual or entity from “compelling or soliciting” belief of CRT tenets, as well as imposing preferential treatment based on them. The resolution would encompass all levels of public education, from K-12 through higher education.

The bill, HCR2001, also passed the House last month along party lines, several weeks after Udall’s bill passed. It passed the Senate Education Committee last week, and will be considered in the Senate Appropriations Committee on Thursday. 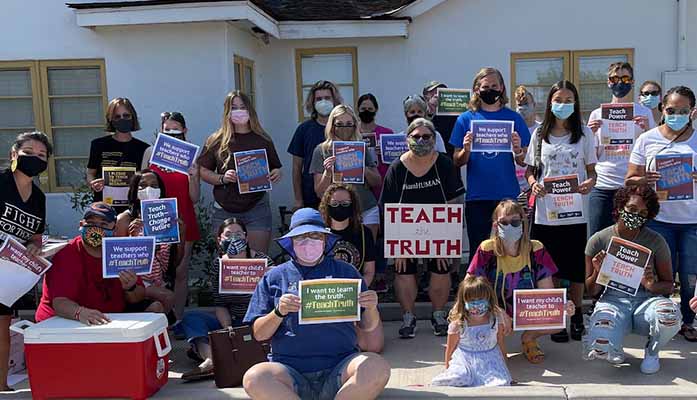 Over 200 Arizonans who identified themselves as educators have signed onto a pledge to teach Critical Race Theory (CRT) and all other social justice-oriented curriculum to children, regardless of the law or the wishes of parents. They conveyed a unified message: that they desired to teach the “truth” and the “true history” of this country’s history.

The pledge was created by the Zinn Education Project, a Washington, D.C.-based collaborative effort between Rethinking Schools and Teaching for Change. Prominent socialist and author of the anti-American exceptionalism book, “A People’s History of the United States,” Howard Zinn founded the project. Zinn propagated CRT concepts that America suffers from systemic racism, and that its imperialism and capitalism are evil. He also sparked controversy in topics previously associated with American pride by claiming Christopher Columbus was evil, President Abraham Lincoln was indifferent on slaves’ freedom, the Allies and Axis Powers weren’t much different, and that the Vietnam War wasn’t about communism.

The following includes those who signed onto the pledge as Arizona educators:

It appears that these educators may have some level of support from the state. The Arizona Department of Education (ADE) encourages educators to pledge that they will teach social-emotional learning (SEL), which also propagates social justice concepts including CRT.