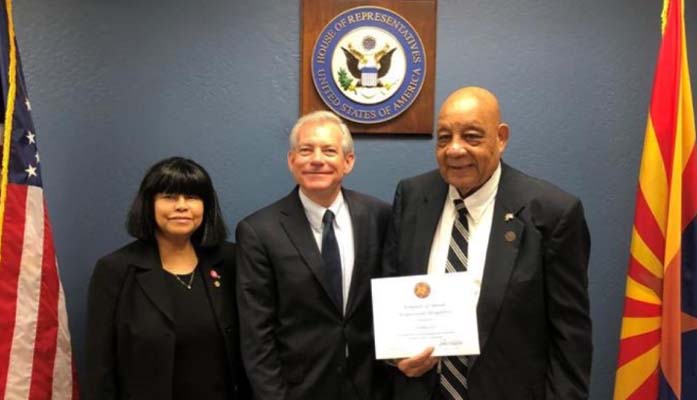 Fountain Hills Post Office On Track To Be Renamed In Honor Of Dr. C.T. Wright


If the U.S. Senate agrees, the post office in Fountain Hills will be designated the Dr. C.T. Wright Post Office Building.

The U.S. House of Representatives unanimously passed H.R. 5650 this month. The bill introduced by Rep. David Schweikert to honor the life of Dr. Wright was co-sponsored by the other eight members of Arizona’s Congressional House delegation.

“The legacy of Dr. C.T. Wright is one that should never be forgotten,” Schweikert said in announcing the House vote. “With the House passage of my bill, we are one step closer to seeing his passion for family, faith, and freedom immortalized in our community.”

When Wright died in 2020, a state biography described his “diverse life experiences” which included being a day laborer in Georgia cotton fields, becoming an elementary school teacher, moving on to college professor and administrator, and being named a university president. He spent much of his education career working at many of America’s historically black colleges.

Wright, who was also a faith leader, later turned his focus to human rights and justice issues. He became a criminal justice expert who developed and supervised several training programs for law enforcement officers as well as an education program for inmates.

Around 1999 Wright moved to Arizona where he went on to serve as a member of the Arizona Electoral College and was appointed to the Arizona Board of Executive Clemency which he later chaired. He also served as a delegate to three national political conventions, was involved with the Fountain Hills Unified School District Governing Board and Fountain Hills Kiwanis Club, and was President of the Arizona African Society.

In 2019, Schweikert presented Wright with the Congressional Lifetime Achievement Award.

“Dr. C.T. Wright’s contributions to Arizona are unparalleled,” Schweikert said after the recent House vote. “I look forward to seeing this important piece of legislation advance in the Senate.”