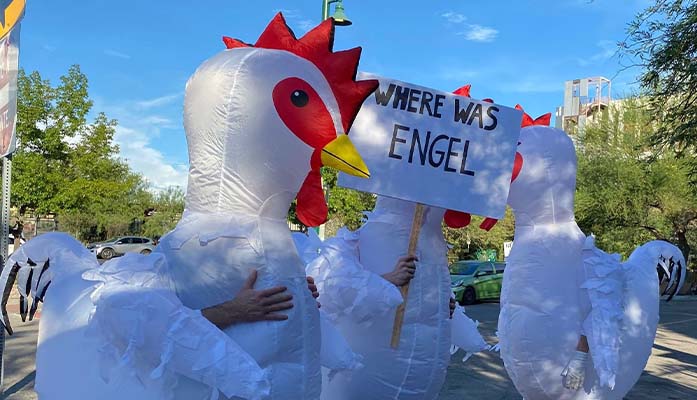 Several people in chicken costumes showed up Friday at a campaign event for former State Rep. Kirsten Engel (D), carrying signs asking where she was the night before.

Those signs refer to Engel’s absence on Sept. 22 from a well-publicized debate in Casa Grande with Republican nominee Juan Ciscomani. The livestreamed event was intended to give Pinal County voters a chance to compare the two candidates for Congressional District 6.

Engel’s campaign said after the no-show that the candidate was advised of the event nearly two months ago, but Engel’s calendar “was still up in the air” at the time. After that, Engel was “not provided with any further details” about the event before last Thursday, according to the statement.

That explanation did not set well with some people. The next night Engel had a campaign event at Club Congress inside Hotel Congress in downtown Tucson.

Hotel Congress is not within CD6.

Engel’s absence renewed attention to the fact other Democrats, including Katie Hobbs, have avoided face-to-face debates this election cycle.

Hobbs, the current Arizona Secretary of State and Democratic nominee for governor, has admitted she wants to avoid a face-to-face debate with her Republican rival Kari Lake. Her decision leaves voters across Arizona with no opportunity to hear her in direct comparison to an opponent.

In fact, Hobbs took the same “no debate” position in her primary contest against former Nogales mayor Marco Lopez.

For his part, Ciscomani appeared to benefit from Engel’s no-show last week by having an opportunity to speak about his policy positions without any distractions or interruptions.