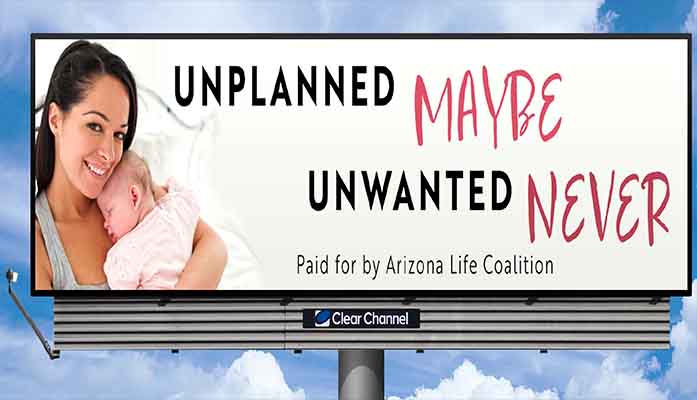 As the fallout from the leaked Supreme Court draft opinion determining the constitutionality of abortion transitions into anticipation for the final, official opinion on the case later in June, pro-life billboards catch the eye of passerby across the Valley.

ALC established the billboards about eight weeks ago, according to their executive director, Garrett Riley. He told AZ Free News that they’ve received only positive feedback from the community.

The billboards display rotating messages that read, “God Doesn’t Make Mistakes,” “Choose Life!,” and “Unplanned — Maybe, Unwanted — Never.” They appear on the I-17 near Thunderbird Road, the I-10 near Baseline Road, and the I-17 along Camelback Road.

Riley stated in a press release that the billboards serve as a platform to share the truth on abortion.

“Abortion is not a women’s rights issue, it is a human rights issue. And it is not about women’s health care or reproductive health either, because health care aims to heal, preserve, and save life — not end life,” said Riley.

Politico received the leaked draft opinion from someone inside the court, speculated to be one of the justices’ clerks. The outlet reported on the draft at the beginning of last month.