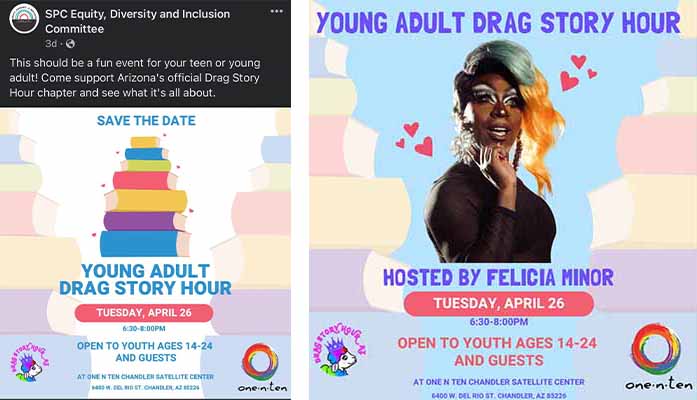 As first reported by the Arizona Daily Independent, Lassen, a school librarian and self-described “community activist,” and Rhoden, an Arizona State University (ASU) professor, accused the Hopi Elementary PTA of racism at a charity earlier this month for hiring a DJ the pair believed to be wearing blackface. The DJ in question was Koko Kim Hunter, a black man. Hunter performed at a disco-themed charity event that raised over $300,000 for the elementary school.

Days later, the SPC Equity, Diversity, and Inclusion Committee promoted a young adult drag story hour. The event occurs next Tuesday at the One N Ten Chandler Satellite Center in Chandler at 6:30 pm.

Rhoden complained about the perceived blackface to both the elementary school PTA and principal. Both informed Rhoden that Hunter was black. However, that revelation didn’t stop Rhoden’s accusations. Rhoden doubled down. He insisted in a Facebook post that he never thought Hunter was a white man committing blackface, and that Hunter, though black, may have committed blackface still. Rhoden attached several photos of Hunter and encouraged readers to judge whether Hunter darkened his skin to look more black. He then accused the parents of “cultural disconnect.”

“Let me be clear, a Black man, apparently in Black face [sic] is an entirely different discussion than a White person. However I did not state that the person was White. It was assumed that was my intent, and perhaps it was, but nonetheless, looking on his Facebook page (photos below), it seems at the very least he is in darker make-up [sic] if not ‘Black face’ [sic] or I am completely mistaken and it’s the lighting of the patio,” wrote Rhoden. “I apologize to [Hunter] for the implication, but the sentiment still stands, Black face [sic] by anyone, in this day and age is problematic. I also apologize to folks who reposted and made other statements based on my assumption. The other images, some of which are still on his FB page, are problematic and speak to the cultural disconnect of the parents at this school. Rather than acknowledge that, they chose to double down on being angry at me rather than trying to understand how one could have made this error. And yes, it was my error.”

Lassen emailed the Hopi Elementary PTA leader, Megan Livengood, with accusations of racism. After Livengood responded with the facts of Hunter’s race and a rebuke of Lassen’s conduct, Lassen replied with an apology.

The accusations reflected Lassen and Rhoden’s perspectives on SUSD parents.

Lassen complained in a promotional video for the drag queen story hour that parents have the amount of influence they do over the district’s activities. In another promotional video, Lassen said that her focus as a parent and educator concerned safe spaces and gender stereotypes.

“I think it is much harder at the school level, as far as the parents having a lot of say and clout with the school district, unfortunately,” said Lassen. “What it means to me as a parent is to provide a safe and nurturing environment for my child to develop their identity as a human, and to always be aware and counterbalance the gender stereotypes that we continually run into as a society. As a librarian, it means providing a safe space for LGBTQ individuals to gather, to learn, and to overall be a part of their community.”

In a Facebook post, Lassen called parents upset about remote learning, “super rich, white ‘Karen’s’,” who she instructed to have “blow [her]” for having concerns about SUSD children’s mental and physical health. She added the explicit hashtag, “#F***MichelleUgentiRita” as an insult to the sitting state senator from Scottsdale.

“You don’t care about them until it’s convenient for you and you pretend to align yourselves with them because suddenly you have the same interests, but when all is said and done and your kids are back in school, you won’t think another thought about them or offer any kind of help or support to the districts or teachers,” wrote Lassen.

“I need a training on training myself to not get exasperated at parents who only care about themselves, who are selfish and who’s [sic] intentions are not socially just,” wrote Rhoden. “Sorry to put this so bluntly, but if another Karen/Becky or Ken ask [sic] one more question on a back to school Zoom call that is only germane to them, I’ma [sic] blow. We are all in this ish [sic] together. Be a team player!”

Currently, there’s a petition calling for the resignation of Lassen and Rhoden. The petition documents the various offenses committed under the oversight of Lassen and Rhoden: promotion of a Drag Queen Story Hour, praise of Planned Parenthood founder and infamous eugenicist Margaret Sanger, and the unfounded blackface accusation made against Hunter.

“One of the organizations that parents have noticed as being problematic is the subcommittee of the Scottsdale Parent Council that is Equity, Diversity and Inclusion. The name implies that kindness and compassion abound, but grievously, the opposite is true. The members of EDI consistently offend and confuse parents and community members with their controversial and divisive rhetoric.