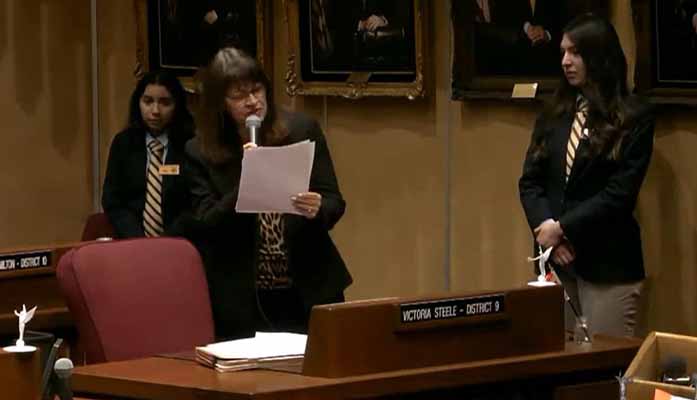 State Senator Victoria Steele (D-Tucson) treated legislators and constituents to poetry and music at the Arizona State Capitol on Wednesday. Steele felt compelled to do so after her fellow Tucson legislator, State Senator Vince Leach (R-Tucson), criticized Judge Ketanji Brown Jackson the day before for Jackson’s inability to define “woman” during her Supreme Court confirmation hearing. Steele considered Leach’s question to be “audacious” and in need of a response. Since it wasn’t feasible for Jackson to speak for herself, Steele stepped up to the plate.

With a giggle, Steele began to recite poet Maya Angelou’s poem, “Phenomenal Woman.” Then, she began to sing the 1971 hit “I Am Woman” by Helen Reddy, which she explained was offered “just in case there was any doubt” about her definition of a woman. Unlike the poem, Steele cut short her song to perform only the first verse and chorus.

“And that, my friend, is a woman,” concluded Steele.

According to the science, Steele’s remarks didn’t answer the question. A woman is an adult female human. A female human is determined by the two XX sex chromosomes that arise at the moment of fertilization. For males, that’s the XY sex chromosomes. According to the greater scope of nature, females have the ability of bearing offspring and/or producing eggs in ovaries. In the case of humans, females produce eggs and have the ability to carry and bear children after reaching sexual maturity.

It appears that Steele prepared a whole day to respond to Leach’s remarks on Tuesday. Leach said it was “troubling” that someone like Jackson was appointed to the highest court in the land.

“What is to be questioned is a system which puts to the bench of the United States Supreme Court someone that can’t answer a simple question: what is a woman?” said Leach.

During a confirmation hearing, Jackson was unable to answer a question from Senator Marsha Blackburn (R-TN) asking her to define the word “woman.” Jackson said she couldn’t answer because she wasn’t a biologist.