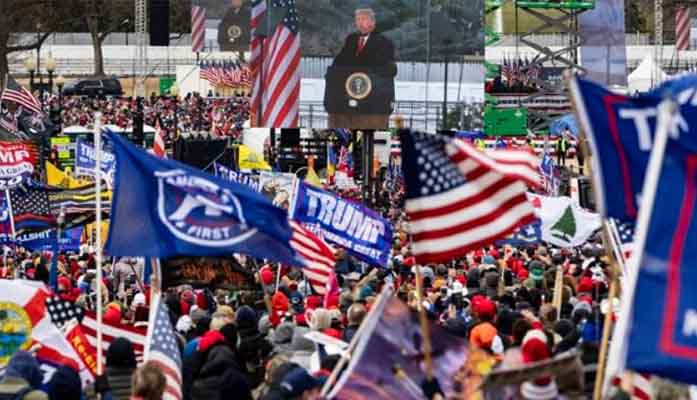 Ahead of the anniversary of January 6, the Arizona Democratic Party’s (ADP) tone concerning the fateful rally-turned-riot shifted from somber to opportunistic. The ADP sent out a fundraising email this week requesting $10 or more donations to flip voters like the January 6 incident did, they said.

The ADP informed recipients that over 20,000 Arizona voters switched from Republican to Democrat following the January 6 riot, which they referred to as an insurrection. They emphasized the importance of financing their grassroots efforts ahead of Thursday’s anniversary.

“Starting today, just before the one-year anniversary of the insurrection, we’re using our Project 15/30 organizing program to reach out to every single one of those 20,000. We want to thank them for their courage and for standing up for our democracy,” read the email. “Team, efforts like this show that through Project 15/30, we’re fighting for every single vote in AZ. But running special programs like this takes people and resources to work. Can you donate $10 today so voter outreach programs like this one are successful?”

Project 15/30 intends to increase voter registration and strengthen party numbers in the 15 counties and 30 legislative districts across Arizona. The ADP launched the initiative early last August.

ADP’s latest messaging conflicts with its previous rhetoric on the subject of the Capitol Hill riot. Throughout last year, the ADP honored the Capitol police officers that responded to the break-in.

“We will never forget the events that took place in our Capitol on January 6, 2021,” wrote the state affiliate. “We stand with the heroic officers who risked their lives.”

President Joe Biden plans to give an address on Thursday to commemorate last year’s riot. During the White House daily briefing on Wednesday, Press Secretary Jen Psaki promised that President Joe Biden would speak extensively on how former President Donald Trump was solely to blame for the January 6 riot.

“The president is going to speak to the truth of what happened, not the lies that some have spread since — and the peril opposed to rule of law and our system of democratic governance. He will also speak to the work that we need to strengthen our democracy and our institutions to reject the hatred and lies we saw on January 6 to unite our country. I’d also note that President Biden has been clear-eyed about the threat the former president represents to our democracy and how the former president works to undermine basic American values and rule of law. And President Biden has spoken repeatedly about how the president has abused his office, undermined the Constitution, and ignored his oath to the American people in an effort to amass more power for himself and his allies. He sees January 6 as the tragic culmination of what those four years under President Trump did to our country and they reflected the importance to the President of winning. What he has called many times the battle for the soul of our nation. So just as you heard him say on January 6 of last year, I would expect that President Biden will lay out the significance of what happened at the Capitol and the singular responsibility that President Trump has for the chaos and carnage we saw, and he will forcibly push back on the lies spread by the former president in an attempt to mislead the American people and his own supporters, as well as in respect to his role in what happened.”

Psaki couldn’t answer as to whether Biden will call out Trump by name because they were finalizing the speech.