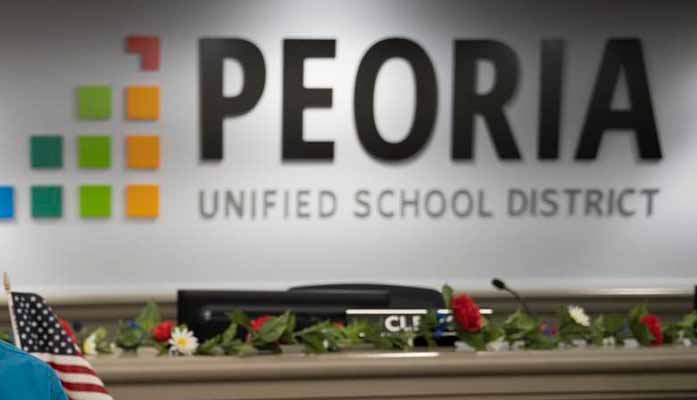 Thursday, the Peoria Unified School District (PUSD) Governing Board delayed its decision on using BLOOM365, a violence prevention program, after parents discovered its CEO mocking them in a private teacher group she administered.

Concerned parents and community members who spoke at the governing board meeting compared BLOOM365 CEO, Donna Bartos, and the private Facebook group she administered, Peoria Drives Change, to “Mean Girls.” A Tolleson Union School District (TUSD) teacher, Melissa Girmscheid, was also one of the administrators. The Facebook group doesn’t appear to exist anymore.

“BLOOM365” is an acronym for their slogan, “Bring Love On Others More 365 Days a Year,” with the main mission of preventing teen dating abuse. If approved, the nonprofit would provide PUSD with staff training as well as curriculum, programs, and resources on healthy friendship and relationships, youth violence prevention, student and school safety, and social, emotional, and behavioral services through this school year and the next. Funding for their outreach education comes from three state agencies: the Arizona Department of Public Safety (AZDPS), the Arizona Department of Health Services (AZDHS), and Governor Doug Ducey’s Office of Youth Faith and Family.

Superintendent Jason Reynolds, who didn’t attend the meeting in person, was the one who requested initially that the board delay a decision on the item.

AZ Free News reviewed copies of content from the Peoria Drives Change group. Bartos appears to have allowed and encouraged teachers to use the space to air their grievances against parents and children as well as share the private details of students. Bartos herself derided PUSD parents who disagreed with concepts like white privilege as “off their rockers” and “f*****g nuts.”

Bartos criticized one mother’s advocacy for her child’s education, speculating to group members that the mother’s behaviors were caused by abuse from a parent. Girmscheid mocked the parent’s testimony of abuse as “daddy issues.”

Bartos also criticized vocal parents at governing board meetings as an “angry and obnoxious mob” that spread lies. She shared that she was “quietly” working on a movement to rally voters aged 18 through 24 to reshape Peoria politics.

“We need all Peoria taxpayers who believe religious ideology, radical politics, and exclusionary patriotism have no place on the school board or in our classrooms to band together to shut this s**t show down,” wrote Bartos.

Bartos also advocated for the school district to ignore parents if they conflict with students’ desires.

“PUSD needs to prioritize cultivating a culture of empathy, respect, and acceptance for all students over pleasing parents,” said Bartos.

PUSD governing board candidate Devon Updegraff-Day informed the board that PUSD teachers within the Peoria Drives Change group were attacking a group of 740 parents, West Valley Parents Uniting — a group of which Updegraff-Day is also a member.

One mother, Jodi Brackett, expressed her frustration with the board’s inaction. Brackett served what appeared to be court summons to the board.

Board member Rebecca Hill responded that parents’ complaints gave her “grave reservations.” She acknowledged that few students benefitted from BLOOM365, not enough to warrant the program’s continuation at PUSD.

“They have not proven to me or the public that they are a safe, trustworthy organization,” said Hill. “Either everybody benefits or we’re done with it.”

Board member and State Representative Beverly Pingerelli (R-Peoria) shared that she reviewed some of the Peoria Drives Change content, and that she would vote against approving BLOOM365.

“I don’t believe in condoning bad behavior, so I’ll be voting ‘no.’” said Pingerelli.

Board President David Sandoval, who is also a Democratic state legislature candidate, said that he spent time with site leaders that used BLOOM365 at a “much more frequent level” than them. Sandoval insisted that BLOOM365 does make an impact on students.

Sandoval said that the board needed more time to review the contents of the Facebook group and claims submitted by parents. He defended BLOOM365, saying that the wide range of dynamics among students necessitated the program’s inclusion. Sandoval advised the board members to look beyond the complaints of concerned parents by talking to other districts that use the BLOOM365 program.

Chief Student Services Officer Carter Davidson also defended BLOOM365. Davidson insisted that students did benefit from the curriculum. He said that parents uncomfortable with their child’s exposure to BLOOM365 could opt out, per the state’s codification of HB2161.

One former educator retorted that BLOOM365 included Social Emotional Learning (SEL), which she noted was a subcategory of Critical Race Theory (CRT). She insisted that there were other, better curriculums and training programs available for students and staff.

“If you’re going to use the material that is useful to children who are high-risk, let’s find something that is not written by somebody who is participating in a hate comment as well,” said the educator. “This woman, who is the CEO of this company, participated in hate speech. So, let’s take that in consideration when we review BLOOM365.”

Brent Cobb, the third vice chairman of the LD27 Republican Party, concurred. He advised the board to reconsider BLOOM365 based on Barto’s private Facebook group activity.

“And now we have the CEO of one of these SEL corporations that is participating and allowing hate speech to occur in one of her private online groups,” said Cobb. “If you’re going to allow this type of content in our schools, you need to figure out what the substrate of what that ideology is built upon because the parents are not in the room when these courses are being taught. And us parents need to have enough faith in the integrity of the program that we don’t have to worry about the content that’s being shared with our children when we’re not in the room.”

Community concern over BLOOM365 picked up last summer, after Bartos advocated for SEL to the governing board and community but didn’t disclose her status as a district vendor.

AZ Free News reached out to PUSD for comment. Their spokesperson said that they were informed Monday of the Facebook group, but haven’t been able to access it for review.

“We were informed today that a private Facebook group may be discussing students and staff. Since it is private, we do not have access to log-in and view the comments or discussion,” said the spokesperson. “We did speak with one parent to address concerns she had about the comments and will be having follow-up conversations to ensure that student information remains private. As we prepare to start the new school year, protecting the privacy of our student information remains critically important to us.”

Concerned parents revealed at Thursday’s board meeting that they supplied the PUSD governing board with content from the Peoria Drives Change group.

PUSD teachers are far from the first to create private Facebook groups to air their grievances about parents, children, and community members.

One such group made national headlines for its plans to hack and infiltrate parent and community groups containing ideological opponents. The group, “Anti-Racist Parents of Loudon County,” included teachers and school board members from the controversial district, Loudoun County Public Schools (LCPS), as well as local officials like George Soros-backed commonwealth attorney Steve Descano. Two recall efforts are underway for Descano currently, unrelated to his membership in the Facebook group.

LCPS has been in and out of the public eye since the pandemic began — most notably, for the coverup of a sexual assault in one of their high school’s bathrooms. Media coverage exposing that incident and subsequent issues within LCPS played an integral role in flipping Virginia’s governorship from Democratic to Republican.