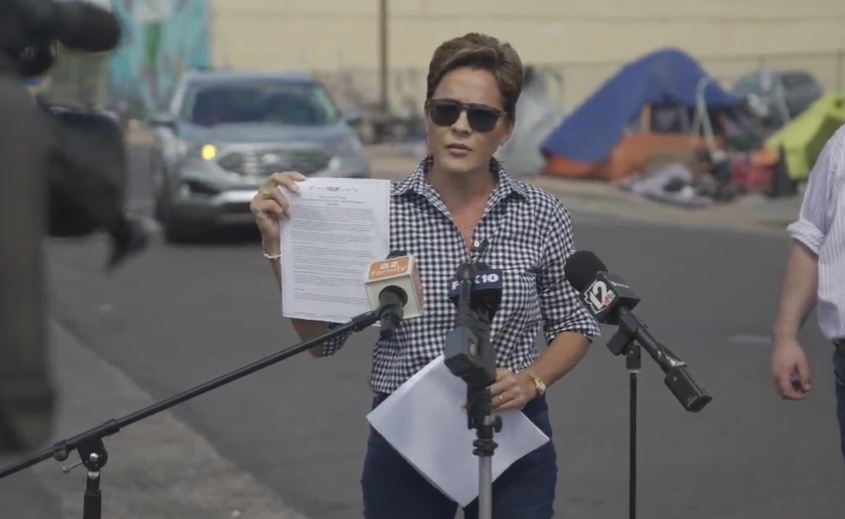 Republican gubernatorial candidate Kari Lake accused the media of “getting caught up in a bunch of BS stories” while ignoring her proposed policies.

Lake issued her remarks during a recent press conference to discuss her solutions for Arizona’s homelessness crisis. She asserted that the mainstream media outlets invited to the press conference hadn’t bothered to cover her proposed policies on issues important to Arizonans. Lake added a claim that her opponent, Secretary of State Katie Hobbs, doesn’t have a homelessness crisis policy.

“The media in this town doesn’t care about the issues, they only care about bogus stories,” said Lake.

Hobbs has issued public statements promising to mitigate homelessness, but her policy proposals on her campaign website don’t discuss homelessness.

Lake said that her proposed solution for homelessness was similar to a model employed by the Opportunity Center in Tucson.

Lake noted that the homeless population has doubled in several years’ time. She insisted that current homelessness policies, like those proposed by Phoenix city leadership, have become an industry. Under Phoenix Mayor Kate Gallego, the city developed a plan in 2020 that included provisions to aid the homeless’ qualify of life, such as a Heat Relief Program that provides heat escapes for the homeless through shade structures and “heat relief buses” that offer air conditioning and water.

If elected, Lake promised that no state funds would go into programs that didn’t show results.

“I don’t believe for one second that God envisioned for us to be living in despair on the street with a needle in our arm,” said Lake.

Resnick asked Lake if she’d read any of the local media coverage on homelessness. Lake responded that she wasn’t talking about media coverage in general, but was concerned about the nature of media coverage of her and its avoidance of her solutions, such as for the homelessness crisis. Resnick observed that the media was there to cover her policies.

“We cover [homelessness] all the time. So is it all about you? All about your policy?” asked Resnick.

Lake retorted that Resnick’s approach to news was the reason for his low viewership. That triggered Resnick to offer Lake a sarcastic congratulations.