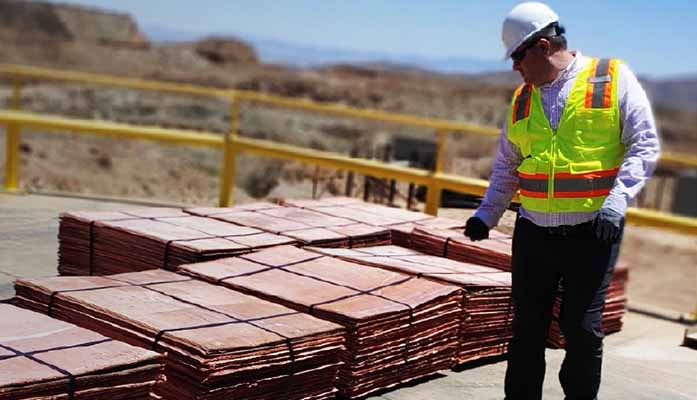 Arizona ‘s hope to reinvigorate domestic copper production has hit what workers and industry experts hope is only a temporary pause with the reduction of workforce and wellfield operations at Excelsior Mining’s Gunnison Copper Project in northern Cochise County.

Toronto-based Excelsior Mining recently announced it would be throttling back operations at its Gunnison Copper Project and would not reopening mining operations at the company’s nearby historic Johnson Camp Mine this summer as projected months ago.

The Johnson Camp Mine is one of Arizona’s oldest copper mines, with records showing miners bore underground into large reserves starting in the 1890s. The site located north of Interstate 10 near Dragoon saw a number of changes over the decades before operating as an open pit mine from the mid-1970s until the end of mining at the site in 2010.

Excelsior Mining purchased the shuttered Johnson Camp property in 2015 with plans to utilize the solvent extraction electrowinning (SXEW) facility at the property to process copper oxide from Gunnison, a state-of-the-art facility built on hundreds of acres the company owns south of I-10. The final product would be 99.999 percent copper cathode sheets to be shipped off to customers.

Construction of the Gunnison facility garnered national attention as an example of reinvigorating American’s domestic copper production. But the project has faced its share of unexpected delays, including COVID-19.

Then company officials had to address carbon dioxide gas bubbles which greatly reduced injection flows and prevented timely ramp-up to production at Gunnison. A workaround was identified by utilizing fresh water to help dissolve the calcite, but the company has acknowledged it “is not considered the optimal long-term solution” due to water conservation and evaporation concerns.

The long-term answer for Gunnison seems to be construction of an expensive to build raffinate neutralization plant. Company officials then took another look at its Johnson Camp property in hopes of generating cashflow.

In September, Excelsior Mining’s CEO Stephen Twyerould announced plans to utilize various copper deposits spread across the Camp Johnson Mine property which could be processed into copper cathode sheets through the SXEW.

“No new infrastructure will be required, with the exception of a new leach pad and minor piping and pumping facilities,” Twyerould said at the time. “Operations could provide up to 5 years of copper production at the 25 million pounds per annum capacity of the existing SXEW plant.”

Then in January, Twyerould announced that two diamond drills had been mobilized to Johnson Camp to assist with assay activities.

“We are moving quickly on key items related to the JCM restart, which, once operational, will provide cash flow while the raffinate neutralization plant is being designed and built for our flagship asset, the Gunnison Copper Mine,” Twyerould said at the time.

Excelsior suggested copper cathode production from Johnson Camp’s open pits could commence this summer after announcing in April that 31 of 34 planned holes have been drilled using diamond drill rigs, with six holes drilled waiting on assays.

Then on June 22, Twyerould announced that the process to obtain permits for the new leach pad was in progress. He also noted drilling activities were helping to map the Johnson Camp deposits in greater detail than ever before.

“The drilling program is now completed with a total of 43 diamond holes being drilled,” Twyerould said. “Six holes are still awaiting assays.”

However, Twyerould went on to announce that the additional drilling and metallurgical testing will push Excelsior’s goal of restarting mining operations at Johnson Camp to sometime in 2023.

“Therefore, in order to conserve cash and maintain a robust balance sheet, Excelsior is reducing its workforce and putting the wellfield on reduced operation by temporarily stopping acid injection whilst continuing recovery and compliance to ensure underground solutions are managed and controlled,” Twyerould said.

In the meantime, Excelsior intends to undertake a more comprehensive evaluation of the oxide and sulfide potential of its mineral resource and mining assets, according to the company.