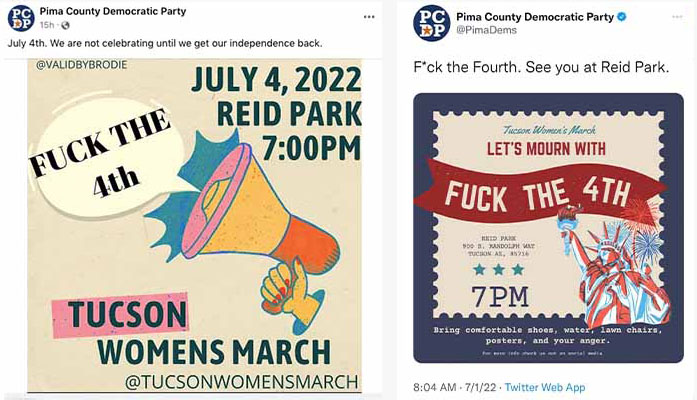 Most Arizonans will spend July 4 watching fireworks after spending the day with family and friends appreciating the many freedoms they enjoy compared to citizens of every other country.

But the Tucson Women’s March has announced a “F**k The 4th” event for attendees to “bring their anger” to Reid Park at 7 p.m. The event was promoted Friday morning on Twitter by the Pima County Democratic Party, who quickly deleted the tweet and accompanied flyer.

The tweet, however, was seen and saved by many people, including leaders of the Arizona Democratic Party. And while party leaders insisted they did not agree with the language used to publicize the event, they did not reject the intent behind it.

In another tweet, the Arizona Democratic Party also supported the event’s “let’s mourn” theme even though attendees are set to arrive at the popular park at 7 p.m. while it will be full of families celebrating the holiday.

By Friday afternoon the Pima County Dems returned to Twitter in a series of tweets which vacillated between an apology and a statement of defiance in support of the “F**k the 4th” event.

“The event was organized to help women in our community grieve for the loss of their bodily autonomy, which we consider an elemental right,” one of the group’s tweets read, while another conceded the graphic nature of the flyer advertising the event “was in poor taste.”

But a third tweet on the subject appeared to take a “the end justifies the means” position.

And Ben Petersen of the Republican National Committee used Twitter to ask if several Democratic Party leaders in Arizona planned to attend the event or intended to denounce it.