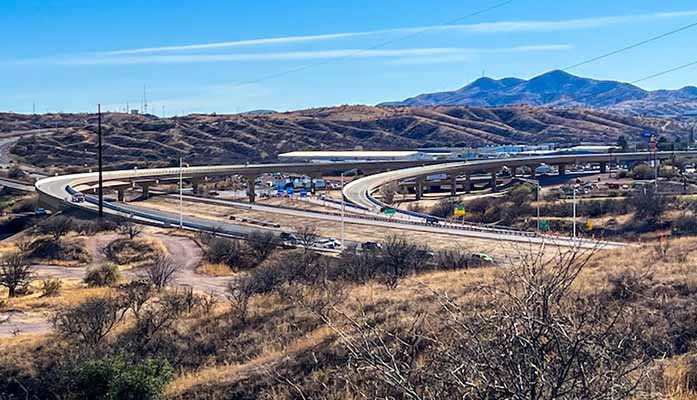 Those traveling through Nogales, especially commercial vehicles coming from Mexico through the Mariposa Port of Entry, are the benefactors of a $134 million road project completed last month after years of planning.

State Route 189 dates back to 1956 and has provided Nogales with a connection to Interstate 19. In recent years, the 3.75-mile roadway has become a critical part of the CANAMEX International Trade Corridor, with close to 370,000 northbound trucks crossing the border at Nogales in 2021, carrying nearly $30 billion in goods.

Plans for the SR189 improvements were announced in 2018, calling for new traffic signals, better drainage, and widening more than three miles of roadway. But the showcase feature is two “flyover ramps” for use by commercial trucks and other vehicles to connect the Mariposa Port of Entry directly to Interstate 19.

Previously, those vehicles had to traverse local roadways, including a key intersection used by students and staff to access Nogales High School. The flyover ramps have eliminated the need for commercial trucks to stop multiple times between the border and I-19, greatly reducing travel time while improving safety.

Construction started in May 2020 with a $25 million legislative appropriation in addition to $25 million from a Transportation Investment Generating Economic Recovery (TIGER) federal grant. Funds were also committed by the City of Nogales, Santa Cruz County, and ADOT.

Members of Gov. Doug Ducey’s Office, the Arizona Department of Transportation, the City of Nogales, Santa Cruz County, and various business and community leaders celebrated the opening of the upgraded SR189 last month.

“Arizona’s strong relationship with Mexico will only grow stronger with the improvement of SR 189,” Ducey said of the March 11 opening. “The project enhances public safety and commerce, attracting even more trade through our ports in Nogales.”

Ames Construction led the construction work for ADOT while Horrocks Engineers was the designer. According to Deputy Federal Highway Administrator Stephanie Pollack, the project exemplifies a  commitment to improve transportation infrastructure and supply chains nationwide.

“The SR 189 project will improve air quality, traffic flow and safety for the region,” Pollack said. “We applaud ADOT for this major investment in Arizona’s future.”

The newly designed SR189 builds on a $250 million upgrade to the Mariposa Port of Entry back in 2014. Jamie Chamberlain, chairman of the Greater Nogales Santa Cruz County Port Authority, said the project impacts the entire Arizona-Mexico corridor.

“When you combine this investment with the investments made on the Mexican road from Mexico City to the border with Arizona, it makes us more competitive against those corridors that lead to California, New Mexico and Texas,” Chamberlain said.

SR180 is expected to be an important piece of the expansion of Interstate 11 to run from Nogales to Las Vegas approved as part of the Fixing America’s Surface Transportation Act of 2015.  The I-11 plan would also feed into Mexican Federal Highway 15D, allowing CANAMEX Corridor commercial traffic to bypass city streets in Nogales, Arizona and Nogales, Sonora.