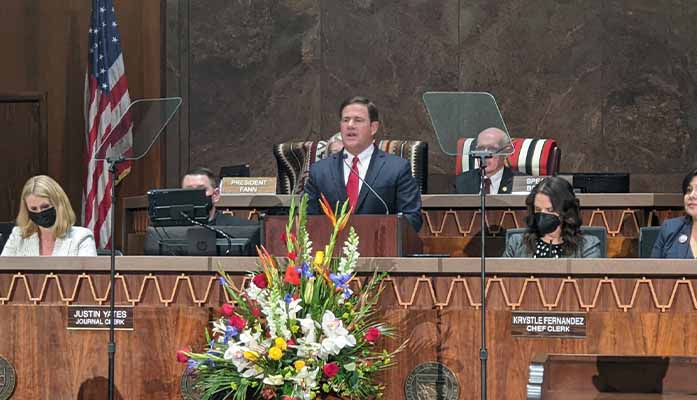 Governor Doug Ducey’s State of the State Address focused on the positives when it came to Arizona, largely reserving criticism for the Biden Administration and federal government as a whole. The governor referenced COVID-19 a mere three times in his hour-long speech, not once mentioning case numbers, death tolls, health care workers, recovery, safety protocols, relief funding, or the like — indicating that the focus in the final year of his administration will concern all but COVID-19 mitigation.

The governor made several explicit promises: a budget published on Friday, further tax cuts, a K-12 learning loss summer camp program, expungement of critical race theory from classrooms, increased resources for foster care families, crackdown on government abuse such as charging victims to process rape kits, and expedited plans of the I-10 expansion.

The governor also announced a five-step plan to address the border crisis; 1) increased funding to the Arizona Border Strike Force and border counties; 2) increased criminal penalties for human traffickers; 3) the American Governor’s Border Strike Force, a novel alliance with Texas Governor Greg Abbott and their top law enforcement; 4) building the remainder of the border wall; 5) a sort of strike in which U.S. senators refuse to vote “yes” on any legislation until President Joe Biden builds the border wall, installs virtual border surveillance, increases funding to local communities harmed by the border crisis, and clarifies to illegal immigrants that the border isn’t open. For that last point, Ducey suggested that Senators Mark Kelly (D-AZ) and Kyrsten Sinema (D-AZ) take advantage of draft legislation he provided on his website.

Ducey requested the legislature take up certain initiatives: establishing a program to waive the tuition of military spouses, similar to Texas’ Hazlewood Act; requiring searchable online publication of all K-12 curriculum and academic materials; school choice expansion such as through greater open enrollment, new transportation, more charter schools; . Ducey shared that public safety would be a top priority within the budget, with proposals such as making state troopers the highest paid law enforcement statewide.

“[A]nyone who has ever worked with me will attest: I have a hard time stopping to celebrate victory,” said Ducey.

The governor highlighted how the state budget was underwater by $1 billion when he assumed office, caused by the recession and what Ducey called “out-of-control spending” and “budget shellgames.” He reminded those present that money was so tight the state government sold the deed to the state capitol.

Ducey reported a current surplus amounting to billions of dollars, a portion of which helped the state buy the capitol’s deed back several years ago. Likewise, he recalled how most job availability just prior to his administration was found in construction and call centers due to national perception of Arizona as a “flyover state” to Texas; Ducey explained that the state has since greatly diversified its job market.

“Now, because of our combined work, we have an all-of-the-above approach on jobs. Not just call centers but also car manufacturers, autonomous vehicles, tech start-ups and world-class semiconductors,” said Ducey. “We said we wanted to be a jobs juggernaut, and in the process, we became a paycheck paradise. Plus, unlike California, Illinois and New York, here you actually get to keep your paycheck.”

Ducey detailed how he dedicated himself to “shrink a government and grow an economy.” In addition to improvements in the unseen, like flow of state cash, Ducey pointed out that he’d reduced government size to a point where 750,000 square feet of government buildings have been demolished during his administration. The governor also emphasized that his focus for his final year would be to offset the living costs caused by Biden Administration policies.

“It’s really not that complicated; it’s just basic common sense. Government takes in more than it needs to pay the bills, and the taxpayer should get to keep his or her hard-earned dollars,” declared Ducey.

“That’s not the Arizona way,” said Ducey. “There’s no such thing as a free lunch or free money. Instead we will focus on rewarding hard work.”

Concerning the border, Ducey warned that President Joe Biden and his administration are working against Arizona. The governor lobbed criticisms at Department of Homeland Security (DHS) Secretary Alejandro Mayorkas and Vice President Kamala Harris for keeping a cool distance from their duty to solve the crisis.

“If you are an elected official charged with overseeing a police department and you don’t believe there’s a correlation between the attacks on law enforcement and rising crime rates nationally, you need a reality check because you’re putting public safety and human life at risk. We intend to keep Arizona a place where we honor and value our cops and all of law enforcement, including correctional officers and first responders. A place where public safety matters. No riots. No smash and grab. And a news flash for the DOJ and Merrick Garland: Mr. Attorney General, instead of attacking Police Chief Jeri Williams and her officers for risking their lives and keeping Arizona streets safe during civil unrest, your time would be better spent protecting the federal courthouses in Portland, Seattle and San Francisco. Do your job.”

While on the subject of different approaches to governance, the governor also addressed the massive influx of blue-state transplants, calling it the “good problem” of growth. He chalked the migration to discomfort with Democratic policies leading to issues such as higher taxes and stricter COVID-19 regulations.

For the transplants, Ducey had one specific message.

In regard to K-12 education, Ducey asserted that the state legislature under the previous administration was more interested in maxing out expenditures than quality of education. Ducey also placed blame with those school boards and unionists for imposing COVID-19 policy that did more harm to children than good. With that, the governor insisted on the importance of school choice, especially for the poorer and minority children. Ducey likened teachers unions and their supporters to Civil Rights-era politicians barring minority children from entering schools.

As for current issues the state faces, Ducey highlighted a “massive” backlog of untested rape kits, some of which his administration cleared up only to discover government abuse in the form of bureaucrats charging victims up to $800 in processing charges and sending collections agencies after the victims if not paid. The governor also broached the subject of drought mitigation and water supply, proposing a $1 billion investment in Mexico for desalination technology.

In closing, Ducey dismissed doubts of little to no progress due to a divided legislature and the upcoming midterm elections. His final remarks centered the focus for his last year as governor.

“As you see, as much progress as we’ve made – there’s plenty left to do on so many fronts,” said Ducey. “And we’ll have all year to grind it out together: a continued focus on the health of our citizens, and support for our hospitals, and dedicated healthcare workers; investments in cyber security to protect the identity and data of our citizens; improvements to our elections, to bring confidence and security; better broadband connectivity all across rural Arizona; more efforts to prevent wildfires; maintaining Arizona’s position as the number one pro-second amendment state in the nation; protecting life in every way possible; and all along the way, preparing for another Super Bowl, where our beautiful state will be center stage just a year from now.”

Watch the full State of the State address here: