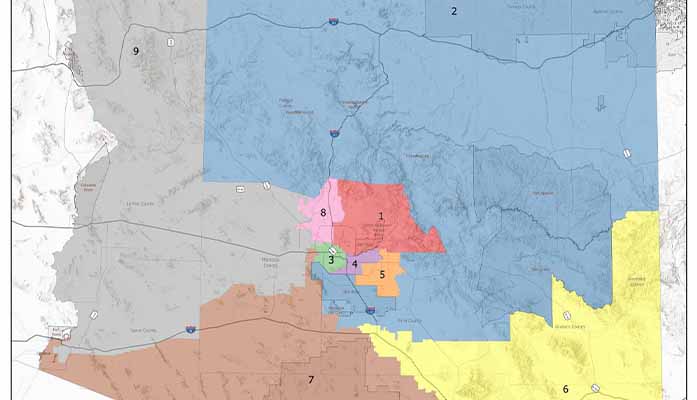 The Arizona Independent Redistricting Commission (AIRC) adopted two maps on Wednesday that will define the state’s 9 Congressional and 30 Legislative districts for the next decade starting with 2022 elections.

But getting to that final vote involved some of the most contentious negotiations in the months-long redistricting process, and sent the commissioners into an executive session with their legal counsel.  It was also marked by the AIRC’s two Democrats voting against ensuring the district numbering system follows state law.

Every decade the state’s congressional and legislative districts have to be redrawn based on the latest census population data and several goals, such as district shape, geographical features, respect for communities of interest, compliance with the federal Voting Rights Act, and potential competitiveness.

Under Arizona’s current CD map, five districts are represented by Democrats. But historical voting data shows the newly drawn CDs will give Democrats a partisan advantage in only three districts.

Republicans will now have a partisan advantage in four of the new districts and a negligible advantage in a fifth. The other CD is considered a toss-up.

However, once that vote was taken discord took over as the AIRC considered the makeup of the final Legislative District (LD) map.

The census data works out to approximately 238,000 residents for each of the 30 LDs, although state law allows a little give and take.  All of the commissioners have proposed various revisions to draft maps since the process started in the spring, and it has not been uncommon for small changes to be proposed to a district boundary.

For example, Mehl and York were willing Wednesday to approve a tweak to the district boundaries of the Flagstaff – White Mountain area at the suggestion of Watchman and the Navajo Nation. Meanwhile, Lerner sought to change LD2, which represents a small portion of Maricopa County.

Lerner, who wanted to reduce the Republican advantage in the LD2, appeared to get frustrated with the lack of progress she was making. At one point she questioned the motives behind her colleagues’ consent to the Flagstaff – White Mountains change, suggesting the Republicans agreed to the revision due to improper partisan interest –to benefit a current lawmaker.

A closed door meeting was called with the AIRC’s attorney, after which the commissioners continued debating Lerner’s various changes for LD2.  Then Mehl and York told Neuberg that if LD2 was changed, they wanted to revisit the boundaries of LD13, another district in Maricopa County.

The posturing did not set well with Neuberg. “I don’t have an appetite to go back and reopen each and every deliberative process we’ve done on each side,” the chairwoman said.

Neuberg eventually voted with the two Republicans to approve LD map version 16.1 once she recognized the Democrat commissioners were not going to change their position.

But the disharmony continued, carrying over into what should have been an obvious unanimous vote – to renumber LD5 on the final map to LD1 to comply with a state law which requires the LD representing Prescott to be LD1.  Lerner and Watchman inexplicably voted against the motion.

The maps must still be formally certified by Arizona Secretary of State Katie Hobbs. There is also the possibility of legal challenges to one or more of the AIRC maps, particularly the Voting Rights Act considerations for Hispanic / Latinos and Native Americans.

Another concern is whether the various districts adequately match Citizen Voting Age Population by Race and Ethnicity data from the U.S. Census Bureau.

If a judge were to order any changes to the process or a specific map, such a change could require tweaks to one or more other maps.

The final maps can be viewed here