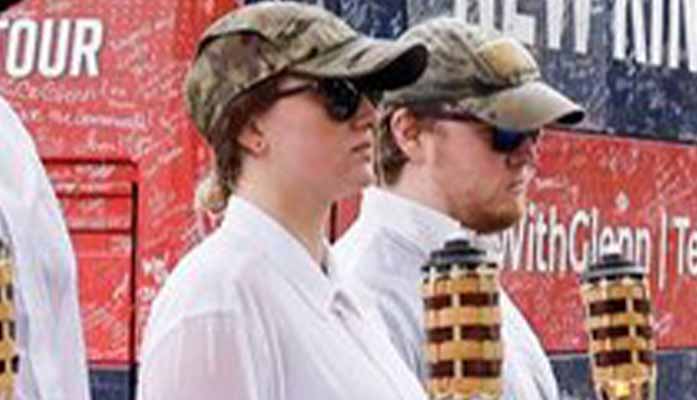 The Arizona Democratic Party didn’t respond to multiple requests for comment. As for Wachenfeld: she has not denied or affirmed her involvement in the stunt, though immediately after social media users identified her as a participant she attempted to disguise her identity on Twitter multiple times, rebranding her handle into names such as “rachelanne1776” and adopting random pictures for her profile and header before deleting the account, then reinstating it and ultimately making all of her social media pages private. She appears to live in Arizona currently, as indicated by her updated Twitter bio.

Wachenfeld was admitted into the competitive School of Public Affairs (SPA) leadership program at her alma mater, the D.C.-based American University. In addition to that program, Wachenfeld was an active member of the Beta Epsilon chapter of Delta Gamma, a national sorority.

Students involved in American University like Wachenfeld could expect to pay around $4,000 or more for four years of sorority membership, not including expenses like uniforms, Big-Little gifts, and philanthropies. (The Beta Epsilon chapter claimed their dues were on par with other sororities on campus, and Phi Mu’s dues totaled around $4,000.)

We inquired with Delta Gamma and the Beta Epsilon chapter whether Wachenfeld’s actions were consistent with their goal and motto to “do good,” and what their standards were for admitting women because, as sororities and fraternities often say, membership lasts for a lifetime. Neither responded by press time.

Wachenfeld’s chapter expressed a steadfast commitment to anti-racism following George Floyd’s death last year. They partnered with the Kentucky-based Muhammed Ali Center to reform their chapter based on diversity, equity, social justice, and the like, applying some of funds from those $4,000-odd memberships to pay for the program.

“With the help of the Ali Center in Louisville, Kentucky, we are developing a program that focuses on racial justice, identities of privilege and oppression, positive social change, and building inclusive and equitable communities. Through workshops, active dialogue, and policy creation, we are working to become actively anti-racist. We have allocated a portion of our chapter operating budget to implement this program, and look forward to finding more meaningful ways to support the Muhammad Ali Center and utilize them as a resource throughout the course of our partnership and beyond.”

Democratic Party of Virginia Executive Director Andrew Whitley claimed that none of their staff members were involved in the stunt. Whitley appeared to be rebuking those who claimed Wachenfeld’s involvement.

“The Democratic Party of Virginia, along with its coordinated partners and affiliates, did not have any role today in the events that happened outside of the Youngkin campaign bus stop today. What happened in Charlottesville four years ago was a tragedy and one of the darkest moments in our state’s recent memories and is an event not to be taken lightly. For anyone to accuse our staff to have a role in this event is shameful and wrong.” (emphasis added)

“Wow. At a campaign stop for Glenn Youngkin this morning, people were holding tiki torches and chanting ‘we’re all in for Glenn,’” tweeted Olaf. “Disgusting reference to the 2017 Unite the Right Rally in Charlottesville.”

“The Unite the Right rally was one of the darkest days in the Commonwealth’s history,” wrote Freundlich. “This is who Glenn Youngkin’s supporters are.”

“This is disgusting and disqualifying,” wrote Goodman.

The Lincoln Project, a Never-Trump group, claimed responsibility for the stunt. They didn’t name the operatives involved. The FEC didn’t show any payments from the Lincoln Project to Wachenfeld.

“Today’s demonstration was our way of reminding Virginians what happened in Charlottesville four years ago, the Republican Party’s embrace of those values, and Glenn Youngkin’s failure to condemn it,” wrote the organization. “The Youngkin campaign is enraged by our reminder of Charlottesville for one simple reason: Glenn Youngkin wants Virginians to forget that he is Donald Trump’s candidate. We will continue to hold Glenn Youngkin accountable. If he will denounce Trump’s assertion that the Charlottesville rioters possessed ‘very fine’ qualities, we’ll withdraw the tiki torches. Until then, we’ll be back.”

A majority of outlets and analysts have called the Virginia governor’s race in favor of Youngkin, as of press time.