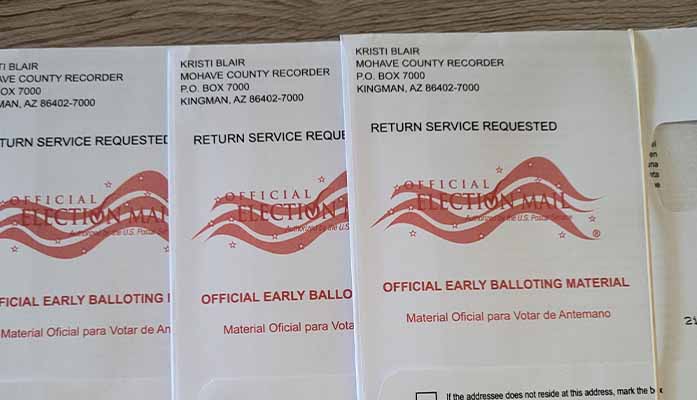 Voters are reporting on social media that they’ve received multiple ballots with different names at their address. This is not to say that these issues have been widespread, but that there are instances of voters receiving three to four different ballots addressed to different individuals.

One Maricopa County voter, Anthony Massara, told the Arizona Daily Independent that he’s received mail for multiple different voters since 2017, despite notifying the post office that none of the voters lived there. This year, the multiple misaddressed ballots he received were for a special election in Scottsdale.

State Representative Leo Biasiucci (R-Lake Havasu City) tweeted pictures of those ballots after Massara reached out to him.

“So the Arizona Secretary of State and Dems say our elections are secure,” wrote Biasiucci. “Here are 3 ballots showing up to a home in Scottsdale, Arizona that has had the same single owner for 5 years. None of those names below are his.”

So the Arizona Secretary of State and Dems say our elections are secure. Here are 3 ballots showing up to a home in Scottsdale, Arizona that has had the same single owner for 5 years. None of those names below are his. pic.twitter.com/F3aP8kQ36B

The state legislature recently passed a law further refining process for resolving ballots addressed incorrectly. Voters may now check a box on a flawed ballot to reflect that the addressee doesn’t reside at their address, and then mail it back to the U.S. Postal Service (USPS).

Then, USPS should return the ballot to the recorder’s office of the affiliated county. At that point, the county recorder would notify the voter that the address they’d listed was incorrect, and offer them 35 days to respond.

A Mohave County voter, Sherrie Row, tweeted that her daughter received two ballots in addition to hers.

“Arizona is just handing out ballets. Only one of these people live here. And mine isn’t one of these. My democratic daughter got hers +2,” wrote Row.

Arizona is just handing out ballets. Only one of these people live here. And mine isn’t one of these. My democratic daughter got hers +2 pic.twitter.com/7yGU76MBZ7

The Arizona Senate’s Cyber Ninjas-led audit discovered over 23,300 ballots that were voted on from a prior address, according to their report last month. Maricopa County explained that these numbers likely included those that may have cast a “federal only ballot,” those who recently moved, or those who requested a temporary address.

“EXPLANATION: 1) Military and overseas voters can cast a ‘federal only ballot’ despite living outside the U.S. The address tied to their ballot would be their prior address in AZ. 2) People are allowed to move from one house to another (or even one state to another) in October and November of an election year (yes, shocking!). If the driver’s license address matches the voter registration address, they are still allowed to vote. 3) For the November General Election Maricopa County had 20,933 one-time temporary address requests. In addition, snowbirds and college students tend to have forwarding addresses when they are out of the county. 4) Mail-in ballots are not forwarded to another address.”

CLAIM: 23,344 mail-in ballots voted from a prior address.

BOTTOM LINE: Cyber Ninjas still don’t understand this is legal under federal election law. To label it a “critical” concern is either intentionally misleading or staggeringly ignorant. AZ senators should know this too.