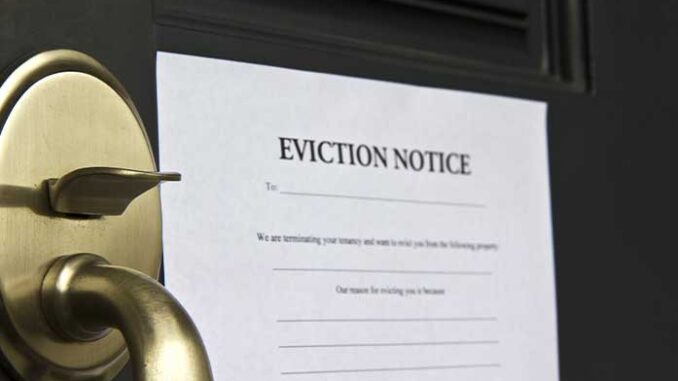 Landlords across America are owed more than $15.3 billion in rent arrears, and that amount is expected to hit nearly $19 billion by December, according to a report released last week by the Federal Reserve Bank of Philadelphia just as a federal moratorium on residential evictions expired.

In Arizona, residential rent debt – including utility costs normally paid to a landlord or management company- is estimated at more than $292,000 million across 43,900 households, That represents 5.9 percent of all renter households in the state, just above the national average of 5.8 percent out of 6.5 million households.

The Fed Reserve statistics are based on estimated rent arrears related directly to a loss of employment revenue during the COVID-19 pandemic. It is estimated that roughly 138,500 Arizonans -and more than another 15 million people nationwide- are in arrears under that criteria alone.

The justice courts in Arizona’s 15 counties are expecting an onslaught of new evictions filings, as well as a push for removal notices from landlords who previously filed for and received an order for eviction but were prevented from enforcement due to the moratorium implemented by the Centers for Disease Control and Prevention (CDC).

Arizona officials received nearly $1 billion in rental assistance, but agencies, renters, and landlords say the programs are paying out at a snail’s pace, leaving renters and landlords alike in a precarious financial position.

Many of the households that are expected to be evicted in Arizona in the coming weeks have reported not having another place to move to, in part due to damaged credit ratings and a loss of savings during the pandemic. On the flip side, many landlords in some parts of the state have a waiting list of prospective tenants ready with cash in hand to move in once non-paying tenants can be forced to move out.

Timed with the Fed Reserve’s July 30 report, President Joe Biden called on state and local governments to “take all possible steps to immediately disburse” the $45 billion of emergency funding approved by Congress as part of the American Rescue Plan.

“There can be no excuse for any state or locality not accelerating funds to landlords and tenants that have been hurt during this pandemic,” the president said.  “Every state and local government must get these funds out to ensure we prevent every eviction we can.”

In the meantime, the Federal Housing Finance Agency is requiring all landlords of rental properties with Fannie Mae or Freddie Mac mortgages to give renters a 30-day notice to vacate before requiring them to leave, regardless of any local court-issued eviction order.

The CDC’s eviction moratorium had been extended several times before it expired July 31.  The moratorium does not relieve renters of the legal obligation of paying rent, as well as any late fees, penalties, or interest. Those ancillary costs owed by renters are not included in the Fed Reserve estimates of renter debt.

The moratorium also required renters to attest to suffering a “substantial loss of household income, loss of compensable hours of work or wages, a lay-off, or extraordinary out-of-pocket medical expenses. In addition, renters were required to certify they have undertaken “best efforts to obtain all available government assistance for rent or housing.”

Renters were also required to pledge their “best efforts” toward making “as close to the full payment as the individual’s circumstances may permit, taking into account other non-discretionary expenses,” and that if evicted, they would likely become homeless.

Eviction protection was waived under the CDC moratorium for renters who violated other terms of a lease, such as being convicted of committing criminal activity on the premises, damaging the property, or violating health ordinances or building code.