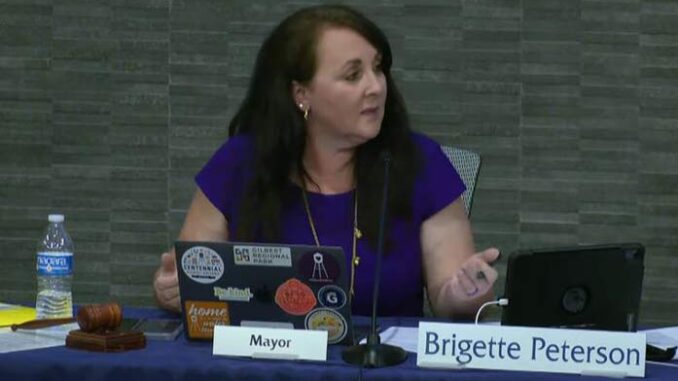 Gilbert awarded a $17,000 contract for a survey to a political consulting firm that Mayor Brigette Peterson used during her election campaign last year. During the campaign, Peterson paid a total of $9,530 to the firm, Camelback Strategy Group, for consulting and social media services.

Camelback Strategy Group doesn’t have any public record or advertisement of surveys completed prior to the one conducted for Gilbert. The closest thing that the firm offers to surveys is through their affiliated – but independent – company, Grassroots Advocates. However, that company only offers political data and strategy services like voter contact, door to door canvassing, phone-banking, sign set-up and delivery, signature gathering and validation, tracking and blocking – and according to email records obtained by AZ Free News, Grassroots Advocates didn’t complete the survey. Camelback Strategy Group did.

It is unclear how Camelback Strategy Group came to be selected to conduct the survey. Peterson’s spokesperson told AZ Free News that the mayor wasn’t involved with the transportation bond poll conducted.

We also reached out to Camelback Strategy Group for comment. They didn’t respond to AZ Free News by press time.

The survey was conducted through a phone poll. Based on email records between Camelback Strategy Group Partner Chad Heywood and Deputy Town Manager Leah Hubbard, the survey canvassed approximately 350 Gilbert residents and took about a week to complete.

Although the council vote on the bond occurred over two months ago, the fact that the mayor’s political consulting firm received around $17,000 to conduct a survey stood out to constituents enough for it to be discussed during Tuesday’s council meeting.

Public commentary tied the $17,000 survey to the several open investigations against Peterson concerning issues like work environment and ethics complaints.

One resident, Jim Torgeson, said he was disappointed with the council for not holding Peterson accountable.

“Judgment includes those multiple ethics complaints, optics of favoritism – with no efforts to correct those – optics of racism, the optics of quid pro quo, the optics of hostile work environments, the optics of a poorly-run high school clique council. The mayor won’t fix it. I’m asking you to fix it,” said Torgeson. “The last thing I need to think of is that people are awarded contracts because they’re political consultants that worked on the mayor’s campaign, awarded $17,000 to do a phone poll. A phone poll, and they don’t even do phone polls.”

The public became further incensed when Peterson opened discussion on a proposal to overhaul public commentary protocols. Instead of 3 minutes for every person with up to 15 minutes of speaking time unless the council decides on an extension, the mayor proposed that she should be the sole decision-maker on who could speak and for how long.

The mayor’s opponent, Matt Nielsen, spoke up about this proposed rule change during the meeting. He reminded the council that America is still a constitutional republic, and said that the mayor was trying to control public commentary because of the ongoing investigations against her.

“The fact that [this proposal] has come before the council at all is further evidence that Mayor Peterson is more committed to the preservation of her own public image in light of multiple recent alleged ethics violations than she is with the American ideal of civic engagement in government,” stated Nielsen. “It’s a terrible look for our town’s top elected official to allow a consolidation of power to herself relative to the speech of Gilbert citizens when she is under heavy scrutiny for multiple serious allegations.”

The council members questioned Peterson’s intent and rationale for introducing the rule change.

Peterson responded that the proposal wasn’t borne out of “malicious” intent, but that she was simply trying to rewrite the code to match years of council operations. Despite her explanation, the council didn’t appear to back the proposed changes as written.

Watch the full meeting below: