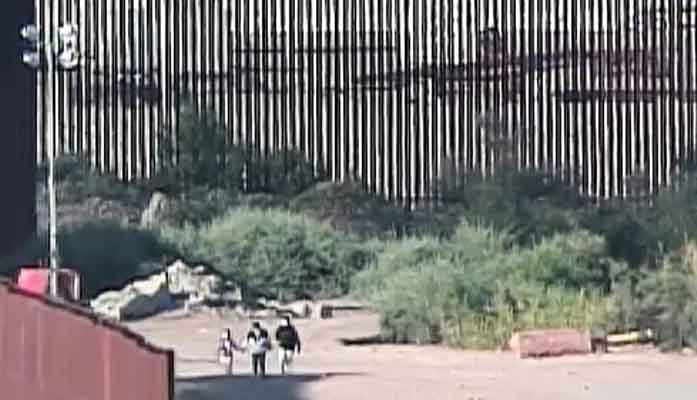 Just this week, Chief Patrol Agent Chris T. Clem tweeted: #YumaSector agents encountered a nine-year-old girl and a 12- and 17-year-old boy on the west side of Yuma Sunday morning after they illegally crossed the border into the U.S. by themselves. In the last week, agents have apprehended 24 unaccompanied children under the age of 13.

#YumaSector agents encountered a nine-year-old girl and a 12- and 17-year-old boy on the west side of Yuma Sunday morning after they illegally crossed the border into the U.S. by themselves. In the last week, agents have apprehended 24 unaccompanied children under the age of 13. pic.twitter.com/fqw35CV5GL

The governors are asking the Biden administration to end what they say are “destructive policies that have created the crisis at the southern border.”

They remind the administration that their letter “follows months of deteriorating conditions at the border in Arizona and other states.”
According to the governors, in March, U.S. Customs and Border Protection reported 172,000 encounters, the highest number in nearly 20 years, as well as 18,890 unaccompanied children, the largest monthly number in history.

Also on Tuesday, the Arizona Attorney General tweeted: April stats from DHS show another record-number of encounters w/ migrants– more than 178,000 last month, including 17,000+ minors (not including “got-aways”). The longer the President maintains his reckless immigration policies, the worse this crisis at our border will get.

“As a border state, Arizona is on the front lines of the border crisis. We feel the impacts of human trafficking, drug smuggling, and this humanitarian crisis first,” said Ducey. “Now, the Biden-Harris border crisis is affecting other states too. And it’s clear the crisis is the direct result of this administration’s broken policies and botched messaging.”

“Arizona has deployed all available resources, including the National Guard, but we need federal cooperation to secure the border,” Governor Ducey said. “Today, I am joining 19 fellow governors to call for immediate action from President Biden and Vice President Harris to stop this crisis before it gets even worse.”

Arizona has been calling for action on the border crisis from the federal government for months. Last month, Governor Ducey declared a state of emergency at the southern border and deployed the Arizona National Guard to support law enforcement agencies in border regions. The Governor visited a wide-open section of the border in Yuma and called on President Biden to issue a national state of emergency on the border. Governor Ducey and Texas Governor Greg Abbott also wrote a joint op-ed in the Washington Post.