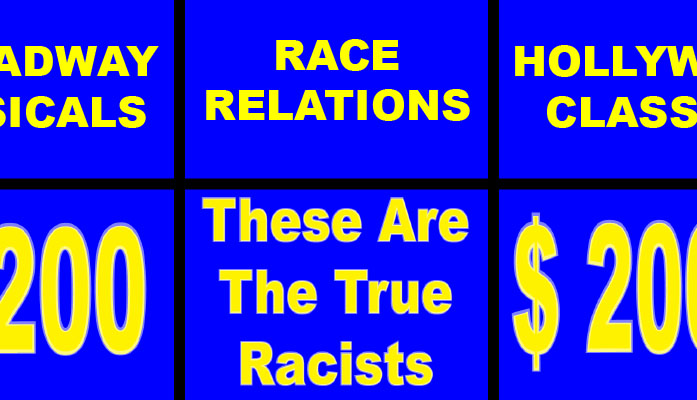 Acknowledged, Systemic Racism Exists: It Doesn’t Originate Where You Think, However


Every so often, the answers to problems of the day are best revealed through questions. Jeopardy gets it right.

So, today’s answer is, “These are the True Racists,” and the questions are as follows:

Are racists those who want to keep minorities ignorant, allowing no school choice and locking them into the public school system? Or, is it those who want to give every child the choice of where to receive an education?

Is it those who promote abortion clinics in the inner city? Or those who seek to protect the sanctity of life?

Is it those whose policies have helped destroy families of minorities and refuse to learn from experience? Or, is it those who grasp the failure of these policies and want to change them to preserve the family structure?

Is it those who teach victimhood and, “No, you can’t without government’s help?” Or, might it be those who acknowledge the bright potential and future of all and those who support and encourage all in realizing their potential?

Is it those who create dependency and no path out from poverty? Or, is it those who want what is best for each individual and strive to adopt and implement policies that would do just that?

Is it those who tell you that you were never a true American, entitled to the full benefits of citizenship, with no hope of attaining the American dream? Or, is it those who know you are an American with all the rights and privileges that entails, and the ability to pursue your own happiness?

Is it those who teach that any struggle you face is derived from racism and flaws in the system? Or, is it those who cheer for your success and who recognize that each individual has unique challenges to overcome?

Is it those who have such low expectations that they don’t think you can obtain an identification card? Or, it is those who see an equal and treat you as such?

Is it those who see color first, to the exclusion of attributes? Or is it those carrying-out Martin Luther King’s vision of judging by character alone?

Is it those who wish to re-segregate? Or, those who strive for integration?

Is it those who intentionally use race to divide because of their own nefarious ends? Or, is it those who want to heal and continue what progress we’ve achieved?

Is it those who don’t want you to know the real statistics of police shootings, as it would destroy a narrative? Or, it is those seek to tell the truth of local policing?

Is it those encouraging entitlement and rage as a way of life? Or, would it be those who strive to instill self-worth and dignity?

Is it those teaching false history to intentionally manipulate perspectives? Or, it is those teaching history, its shames included, who understand America’s progress in living-up to its creed of “all men are created equal?”

Is it those that teach “us-versus-them?” Or, those who teach of a common, “we?”

Is it those seeking to divide along racial lines? Or those aiming to unite as Americans sharing similar visions?

The Jeopardy paradigm takes the mask off and reveals the answers.

Those most often pointing the finger, accusing others as being racists, protest too much.

It is time that the truth be known.

Yes, it seems that systemic racism IS flourishing in America, but it is not coming from our traditional core ideals, founding documents or American patriots. It is coming from those who perpetuate bogus lessons of history and false, self-serving proscriptions.

All must look at facts and stop accusing those bereft-of-prejudice and, instead, turn the focus to the real racist policies and beliefs.  “By their fruits ye shall know them”.  For those who have eyes to see it is not difficult to watch and see which “seed” produces the good fruit, the universal love among all men.

Only when we identify and rip-out the root of this division (false narratives and racist policies that equate to systemic racism) will there be a chance of healing.  As long as race baiters and perpetual “pot-stirrers” are allowed to maintain their undeserved microphones, truth will be suppressed, and any victory will be fleeting.

Jeff Utsch of Tucson, AZ, is an instructor at the Leadership and Freedom Center in Gettysburg PA and can be heard on iHeart Radio’s Podcast, Constitutional Conversations, with KFYI 550-AM host James T Harris, of The Conservative Circus. Jeff@jeffutsch.com