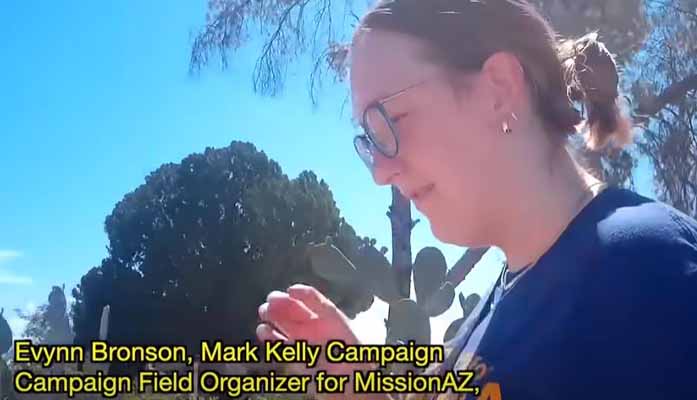 “I would [tell a pro-life voter that] Mark Kelly is pro-life but also pro-keeping the government out of our health care. I don’t know, something stupid like that,” said Bronson. “Absolutely he is not pro-life.”

Kelly co-sponsored and voted in favor of the “Women’s Health Protection Act,” a bill attempting to legalize abortion up until birth.

Bronson, an Idaho native and LGBTQ+ activist, is a political science major at Brigham Young University (BYU) and plans to graduate this fall. Bronson was involved with the Raynbow Collective, an activist group pushing for LGBTQ+ acceptance at BYU, a private Mormon university. Bronson has since wiped her social footprint: her LinkedIn profile, Twitter account, Facebook and Instagram profiles are gone. Earlier this spring, Bronson interned with Congressman Adam Schiff (D-CA-28) — a gig set up by the Victory Institute.

Bronson claimed to Project Veritas that she didn’t know Kelly’s stance on abortion. However, her job as a paid campaign staffer contradicts that claim: she gave a presentation on Kelly’s abortion stance and other topics like inflation and gun control.

“As far as I remember, I said that I don’t know his stance but that he supports the decision between a woman and her health care specialist,” stated Bronson.

Bronson worked the Kelly campaign through Mission for Arizona (AZ) throughout the summer, the advocacy nonprofit funded by the Arizona Democratic Party. In July, Bronson advised the Democrats of Greater Tucson (DGT) on “How to Talk to Voters.” One of the contentions that DGT members had during the presentation was that Bronson and fellow Mission for AZ staffer Anna Smith focused on advocating for Kelly rather than other Democratic candidates ahead of the primary elections.

In her advice, Bronson claimed that she and other campaign staffers weren’t there to change minds. Advice on addressing Kelly’s stance on abortion didn’t include any mention of his being “pro-life.”

“It’s important to remember we are not changing minds. We cannot have a productive conversation with a super far-right-leaning, conservative person because they’re just so rooted in their beliefs,” said Bronson. “We’re focusing in on those independents, those 40 percent of independents that we showed you, that really don’t know who they’re going to vote for.”

READ: KELLY STAFFERS’ ADVICE ON HOW TO TALK TO AZ VOTERS

Part of the Mission for AZ plan presented by Bronson included registering voters to the Active Early Voting List (AEVL). According to the nonprofit’s research, those who receive an early ballot are 30 percent more likely to vote. Mission for AZ also collected “vote commitments” that included voters’ contact information.