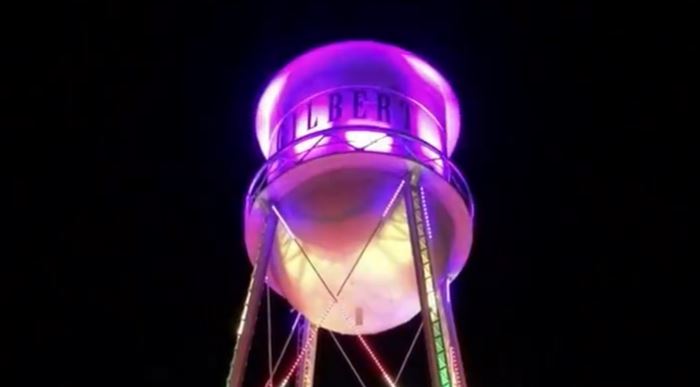 Gilbert’s fire and police departments had a gay old time at Phoenix Pride Parade over the weekend — but some are questioning whether they misused taxpayer funds.

The Gilbert Fire Department and Gilbert Police Department issued a joint post commemorating their participation in the pride parade. The video depicts first responders smiling, waving rainbow gear, and walking with parade attendees, and a fire truck and police car flash their lights; the remix of Earth, Wind, & Fire’s “September” popularized by TikTok trends plays over the video.

Both the fire and police departments were an hour (50 miles) round trip from the Phoenix Pride Parade. Factoring in the drive time at the parade and the average cost of gas in the area ($5.33), that appearance likely cost between $60 and $90 in gas for the fire truck alone.

Gilbert’s first responders don’t attend every large annual parade. For example: they didn’t participate in the Arizona for Life March & Rally in January.

Gilbert Vice Mayor Aimee Yentes told AZ Free News in a statement that this was another example of the town’s wasteful spending for the sake of virtue signaling.

“Despite the Town insisting the organization is as lean as they can possibly get without impacting services, this latest antic is clear indication that they are plagued by a paradigm of waste,” said Yentes. “After all, as residents just struggle to afford putting gas in their car, the town is deploying expensive assets to drive 20+ miles to essentially virtue signal. Town equipment is meant to provide value to town taxpayers. It is not a tool for employees to make their own personal and political statements. This is wholly inappropriate and a slap in the face to taxpayers.”

Some social media users praised the Gilbert first responders for attending the parade, but some questioned the appropriateness of their involvement.

“What does the fire department and police department have to do with people’s sexual kinks?” wrote one user.

“Pretty sure everyone here wouldn’t be just as happy for the police and fire department if they rolled in a MAGA rally for our president a few years ago…” wrote another user.

The manager’s office reportedly promised to look into the first responders’ use of taxpayer funds. However, it’s unlikely town leaders intend to investigate, since the town posted it on their official TikTok account as well.

“Gilbert Fire & Rescue, Gilbert Police Department, and other Gilbert members participated in the 2022 Phoenix Pride Parade,” stated the post. “The Phoenix Pride Parade brings our diverse LGBTQ+ and allied communities together for a weekend of camaraderie and celebration of our past, present and future. #gilbertfire #gilbertfireandrescue #gilbertpd #gilbertaz #gilbertpolice #gilbertarizona #phoenixarizona #phoenixaz #pride #prideparade #phoenixpride.”

The Gilbert Fire Department’s use of taxpayer funds to attend a Pride Parade occurred less than a month before voters will decide on Proposition 310, a new statewide sales tax to increase revenue for fire districts. Firefighter union leaders say that they’re struggling to meet operation costs due to inflation. Unlike a general fund allocation, the sales tax revenue wouldn’t require transparency on expenditures.