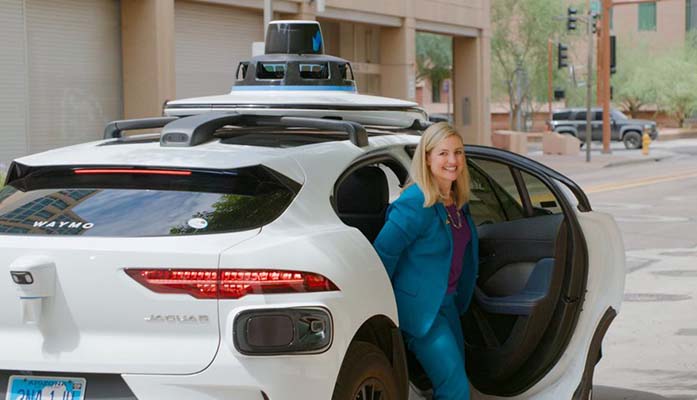 This week, Google made its driverless vehicles available to the East Valley public through its ride-hailing company, Waymo One. The artificial intelligence taxi service is available in Chandler, Gilbert, Mesa, and Tempe.

Phoenix Mayor Kate Gallego was one of the driverless car’s first passengers.

In a promotional video, Gallego said she appreciated that the vehicles are electric, and expressed hope that it would make the city more inclusive.

“There are many people in this community who can’t drive or choose not to,” said Gallego.

This isn’t the East Valley’s first experience with these driverless cars. Google has tested them over the past five years in the area.

One of those test runs went viral last year after the car stalled in a Chandler intersection, blocked three lanes of traffic, and attempted to escape company handlers. The car became confused and stopped because it needed to take a right turn and construction closed off the turn lane with cones. At one point, the car began to back up into oncoming traffic.

The passenger noted that he’d been stranded multiple times before in Waymo’s driverless cars.

Downtown Phoenix will also have driverless cars, but only for Waymo employees and “Trusted Testers,” which are select individuals participating in approved test drives. Unlike the East Valley, the downtown driverless cars will have a Waymo “autonomous specialist” in the front seat.

Waymo is also developing driverless freight transportation through its other initiative, Waymo Via.

Google isn’t the only company testing driverless cars and trucks in Arizona. The Arizona Department of Transportation (ADOT) has approved multiple driverless trucking test runs for the company TuSimple, which has ties to the Chinese government.

According to the American Trucking Associations (ATA), there are about 3.6 million professional truck drivers in the country. Government estimates report about 8 million people involved in the entire trucking industry. Globally, the industry is worth $4 trillion, and truckers make up about 40 percent of operating costs.