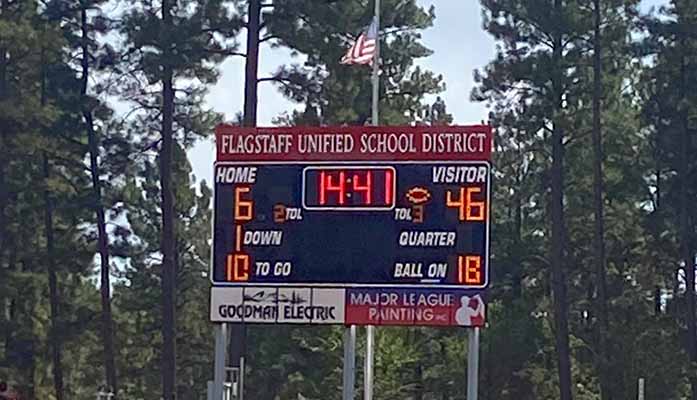 This week, Flagstaff Unified School District (FUSD) employees threatened to call the police on one high school senior for not wearing a mask, ultimately forcing him to leave campus without notifying his parents. The student, Cezar, described his ordeal to conservative talk radio host Jeff Oravitz: he stood outside on a football field with other maskless students, not wanting to be marked absent and desiring an education as he waited for administration to grant them access to the school building.

“My mindset was: I was going to do this protest and still get my education and just go to school, have a normal school day without a mask, and see how it goes,” said Cezar. “But obviously I’m going to stay being respectful and whatnot because that’s the type of person I am and I feel that’s how we need to approach this situation: just peaceful.”

Cezar said that there were approximately 100 students from his high school who protested with him outside against FUSD’s mask mandate, with another estimated 400 students at other schools protesting as well. When he decided he’d attempt to attend class maskless, Cezar took a video of his encounter with administration.

The video shows Cezar engaging with various administrators. Eventually he was escorted by a masked administrator, who wore gauges and his dreadlocks in a man bun. Cezar explained that he’d like to still get his education while doing his peaceful protest. The administrator commented that FUSD should try to find someone who can explain to Cezar and his peers what they’re protesting. When the administrator informs Cezar the other students in class will be masked, Cezar says, “No, thank you,” to which the administrator responds, “Yes.”

The pair eventually come upon another male administrator, who informs Cezar that he can either wear a mask to attend class, stand outside on the football field, or have his parents pick him up. Cezar informed the administrator that they could call his parents and that he would go to class.

At that point, Cezar requested that the administrator sign a document confirming that he had been kicked off campus by school staff due to his peaceful protest against wearing a mask. The administrator refused. She suggested Cezar talk to the school board and superintendent about his refusal to wear a mask.

“I don’t feel like they listen because no ever comes from it,” said Cezar. “And when it does, it’s very minimal.”

Another female administrator suggested that they call the police because she “didn’t feel comfortable” with Cezar around, and that she was going to retreat to a “safer space.” The administrator then explained to Cezar that his rights ended where their rights began.

Cezar also had another document from his parents asserting his right to peacefully protest masking, replicated below:

“To whom it concerns,

Students have a constitutional right to participate in non-disruptive protests during the school day. This means that school officials cannot retaliate against or discipline student protestors unless the protests cause, or are reasonably expected to cause, the disruption of school events or make it impossible for school officials to maintain order.

As the child’s parent this letter is not only my expressed permission but an assertion of my child’s right to peacefully protest in the following manner:

My child is not to be sent to the office. I do not give my child permission to leave campus, nor will I pick my child up. My child shall not be harassed, bullied, or treated differently by any teacher, administrator, faculty, or student for standing up for his/her right to peacefully protest the mask mandates. If any teacher or administrator takes issue with my child’s right to protest, please contact me to meet with them and the principal for further discussion.”

Cezar expressed gratitude that he’s been able to have in-person learning again, but lamented at the difficulties, inconsistencies, and behavior changes from others he’s endured. He described how no educator was willing to help him or even offer a kind word when he was unable to breathe through a mask due to severe allergies.

“The constant masking and being told to put your mask up – teachers are not nice about this, they are kind of aggressive when it comes to making sure our masks are up,” explained Cezar. “I had an incident with a teacher where it’s the end of the school day, I’m walking out and I take off my mask because I’ve been wearing it all day and he like gets right up on me in my personal space and he’s telling me to put my mask back on and he’s demanding it and raising his voice and whatnot. It’s purely not right to talk to us this way.”