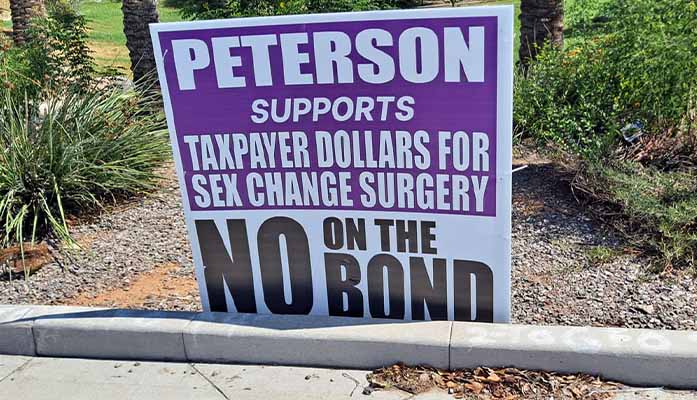 When a longtime resident sued the Town of Gilbert, its mayor, and six councilmembers last week, the public was provided an in-depth look at efforts taken to silence an opponent of a bond measure that tops out at more than one-half billion dollars.

Jim Torgeson, who owns Mesa Sign Shop, undertook an individual effort to post signs around town advocating against the town’s effort to raise $515 million via general obligation bonds to fund various capital improvements. Many of his signs were removed by town officials in the days leading up to voting after Torgeson was accused of violating state law.

Torgeson is asking Judge Jay Adlerman of the Maricopa County Superior Court to declare that town officials, acting individually, collectively, and on behalf of the municipality, violated Torgeson’s free speech rights, broke state law, and engaged in election misconduct to such an extent that the Nov. 2 bond election results must be annulled.

“To be sure, annulling an election is a radical remedy, but the law supports it here,” Torgeson’s Nov. 22 lawsuit states. “The bottom line is that the right to vote, the elective franchise, means little if the government is allowed to stamp out speech that advocates opposing views. It is the uniquely bad acts of the Town of Gilbert that has forced the need for the drastic judicial action that is requested.”

Due to questions about whether the bond election was tainted, Gilbert councilmembers Laurin Hendrix and Aimee Yentes voted against approving the canvass of votes. Until the matter can be fully litigated, Torgeson wants Adlerman to issue an injunction barring town employees, elected officials, and other agents from taking any steps to move toward having bonds issued.

Adlerman has scheduled a Dec. 8 hearing on Torgeson’s requests. As of press time, Gilbert officials had not filed a formal answer to the lawsuit.

Voting in Gilbert’s recent town election was by mail only. Officials reported that the bond question passed by only a 164-vote margin out of nearly 41,400 votes cast. (Another 917 voters took part in the town election but did not cast a vote on the bond issue.)

Town Attorney Chris Payne is working with privately retained legal counsel to respond to Torgeson’s lawsuit. In the meantime, a statement issued last week on behalf of the Town of Gilbert takes issues with the legal and factual assertions contained in the lawsuit. Officials are “confident that the election results will be upheld,” according to the town’s statement.

Torgeson moved to Gilbert in 2008 and has been active in town affairs much of that time. He ran for council in November 2016, receiving 24.55 percent of the vote (he needed 26.01 percent to get a seat).

Peterson has been criticized by Torgeson in the past for her ethics and leadership of Gilbert, which is Arizona’s fifth-most populous municipality with nearly 250,000 residents. The town’s decision in June to seek voter approval of the bond question caught the attention of Torgeson, who supported a smaller, more manageable bond limit.

His anti-bond signs started going up around Gilbert in mid-September, just two weeks before ballots were scheduled to be mailed out. In place of his name, Torgeson printed “Private Citizen” on the signs next to his phone number, which he intended to have up at 100 high-visibility areas.

But town officials alleged Torgeson’s signs violated the law due to the absence of his name. As a result, 57 “non-conforming” signs were removed from town right of ways and later given back to Torgeson.

At the time, Torgeson’s attorney Timothy La Sota shot back at the town’s position, noting the Arizona Revised Statute about names on political signs cited by town officials only requires a name of a candidate “or campaign committee contact person.” Neither applied to Torgeson’s effort, La Sota noted.

“In this instance, there was no ‘candidate’, nor was there a ‘campaign committee contact person’ that was required to be listed under [ARS 16-1019] section (C)(5),” according to Torgeson’s statement of election contest. “As it was, Torgeson did include a valid telephone number on the signs, and there was no valid reason to move his signs or even contact him at all with regard to his signs.”

A few days after La Sota got involved, Gilbert officials responded with “an unconditional and complete reversal,” according to the lawsuit, although the town’s attorneys disputed Torgeson’s claim of violations of any U.S. and Arizona laws.

A subsequent public records request by Torgeson led to the discovery of an email from a town administrator to several other Gilbert employees about the possibility of having employees work overtime on Friday or the weekend to hurriedly remove Torgeson’s signs. (Town offices are open Monday through Thursday only.)

At one point, 15 employees or elected Gilbert officials “had some level of involvement in the effort to get rid of Torgeson’s signs,” the lawsuit states.

Torgeson adds that ARS 16-1019 was passed by the Arizona Legislature “to protect those engaged in free speech from overzealous regulatory efforts by municipalities, efforts that history has shown have not been applied evenly, and application has varied depending on the message conveyed in the sign.”

The lawsuit also alleges Gilbert officials distributed an improperly written informational pamphlet about the bond election. Such pamphlets are allowed by state law but must present “factual information in a neutral manner.”

According to the lawsuit, the pamphlet was written by the town not as “a presenter of neutral and factual information” but as an advocate promoting a “Yes” vote by describing bond approval as necessary to ensure Gilbert’s “quality of life for its residents” and the town’s “long-term sustainability.”

The result, Torgeson alleges, was voter disenfranchisement due to the town “putting its thumb on the scale.”