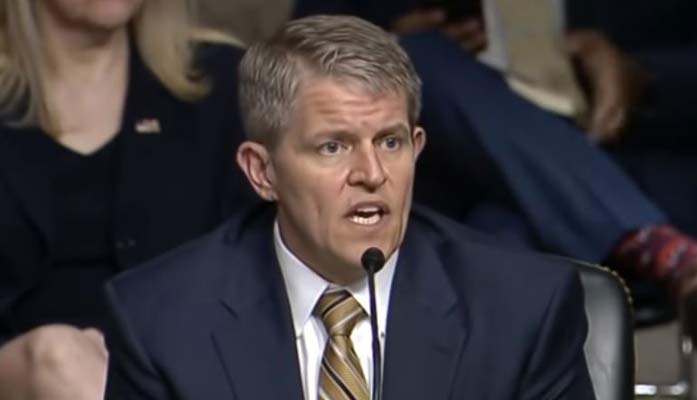 Kelly hired Chipman in 2016 to his gun control organization, Giffords, which he founded in 2013 with his wife, former Democratic Congresswoman Gabby Giffords. Chipman has served as their senior policy advisor for over five and a half years. The description of his role that he posted on his LinkedIn even makes a point to mention Kelly as the co-founder of Giffords.

That description of Kelly wasn’t copied and pasted from Giffords, or anywhere else online. That was something that Chipman likely crafted entirely on his own, because that exact phrasing is unique to his LinkedIn description.

In response to this relationship, State Representative Quan Nguyen (R-Prescott Valley) called for Kelly to recuse himself from the Chipman vote. He published an official proclamation in the Arizona House that received the support of Republican leadership at the federal level like Representative Andy Biggs (R-AZ-05).

Kelly never got the chance to vote on Chipman: the White House announced Thursday that they were withdrawing Chipman as their nominee.

In an explanatory statement, President Joe Biden blamed Republicans for their decision to withdraw Chipman. He praised Chipman as a seasoned leader in the ATF and the choice advocate for safer gun policies. Biden claimed that Republicans were intent on using gun crime as an unserious political talking point, and that they were against “commonsense measures” like universal background checks (UBCs).

Biden also alluded that Republicans were against funding police because they opposed his American Rescue Plan, which he says gave cities and states $350 billion for police. The Biden Administration has highlighted the funds as a means of reversing the sharp increase in gun violence that occurred nationwide throughout the pandemic.

Kelly has yet to put out any statements on his relationship with Chipman.