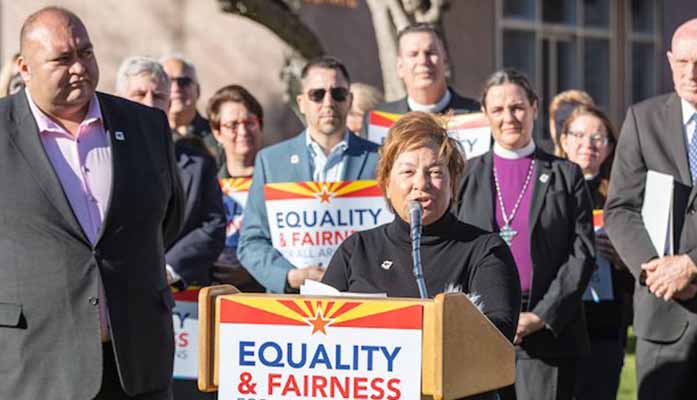 Arizona House Speaker Rusty Bowers (R-Mesa) is advancing a bill to expand anti-discrimination laws to cover gender identity and sexual orientation: HB2802. The bill has yet to be assigned to a committee.

The 23-page bill expands the concept of discrimination in businesses, public accommodations, and workplaces from qualities inherent at birth and protected constitutional rights to lifestyle choices: sexual orientation and gender identity. It also clarifies that health care providers may not provide conversion therapy to minors. Exceptions would be made for buildings designated as houses of worship, denominational headquarters, church offices, or for other religious purposes.

“The regulation of discrimination in places of public accommodation is of statewide concern and is not subject to further regulation by a county, city, town, or other political subdivision of this state,” asserted the bill.

Technically, the bill already garnered bipartisan support: State Representative Amish Shah (D-Phoenix) cosponsored the bill. Shah himself has other LGBTQ initiatives he’s introduced this session, indicating that he would like to see an end to the traditional understanding of marriage. Shah introduced a voter proposition to repeal the provision within the Arizona Constitution that recognizes marriage as existing between one man and one woman.

Bowers’ hometown implemented a similar policy last year. Prior to issuing a citation, city officials will attempt to mediate the complaint.

This wouldn’t be the first show of Bowers’ bipartisan efforts that, in years past, would’ve toed the line on party values. Bowers introduced a bill that failed last year under the introduction of Minority Leader Reginald Bolding (D-Laveen). Bowers’ version, HB2650, would allow several different law enforcement groups to investigate use of force incidents; Bolding’s version would’ve charged the county attorney or attorney general with investigation. HB2650 would also allocate $24.4 million to create a “Major Incident Division” in the Department of Public Safety (DPS) which would serve as one of the law enforcement groups eligible to investigate use of force incidents, alongside regional law enforcement task forces or outside law enforcement agencies. The state general fund would allocate an additional $600,000 to regional law enforcement task forces.

HB2650 was approved unanimously by both the House Military Affairs and Public Safety Committee and House Appropriations Committee.