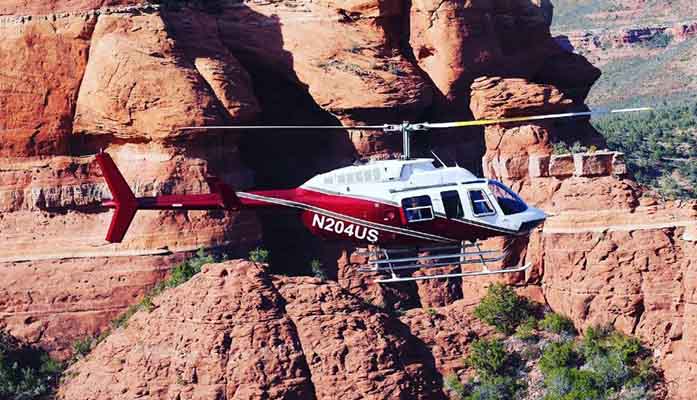 The Arizona Supreme Court has been asked to review a decision by the Sedona-Oak Creek Airport Authority to evict a longtime leasee in a nearly decade-long dispute that has involved a federal judge, the Federal Aviation Administration (FAA), and the expenditure of hundreds of thousands for legal services.

In April 2019, the Airport Authority initiated eviction action against Dakota Territory Tours ACC, which has operated at the airport for several years. The company also operates as Sedona Air Tours and Red Rock Biplane Tours.

Dakota Territory has specialized in air tours of the Grand Canyon area since 1994 with fixed wing aircraft and helicopters, many which can seat four to six passengers. The Airport Authority contends Dakota Territory has not had a valid sublease at the airport since July 2017 and has attempted to evict the company since then, but various legal actions have delayed the action.

A Yavapai County judge put the 2019 eviction action on hold while the parties litigated whether Dakota was lawfully present at the airport. The court’s decision came down against the company, and in January of this year the Arizona Court of Appeals affirmed the lower court ruling.

A petition for review was filed by Dakota Territory with the Arizona Supreme Court in February, and the Airport Authority has submitted a response. If the justices decide to hear the case it would likely be months before a decision is issued.

According to public records, the Sedona-Oak Creek Airport is situated on land owned by Yavapai County, although the county plays a limited role in what happens there. Instead, the Airport Authority leases the property from the county for $1 per year and runs the day-to-day operations under the supervision of an airport director.

Dakota Territory Tours’s dispute with the Airport Authority can be traced back to a 2012 sublease which allowed the company to fly in and out of the airport. A series of amendments kept the sublease in effect through April 2017 at which time the deal was kept in effect per a settlement agreement between Dakota and the Airport Authority in connection to a lawsuit the company filed in 2014.

Part of the agreement called for Dakota to continue to use its space while the Airport Authority put together a formal Request for Proposals (RFP) for that space.

Then in June 2017, the Airport Authority awarded the sublease for tour company space to Guidance Air Service LLC, another longtime leasee. The award made Guidance the only air tour company that would operate at the airport without paying high airport use-fees.

Less than 10 minutes after the RFP was awarded to Guidance, an attorney for the Airport Authority sent Dakota a letter demanding the company vacate its leased space within 30 days.

Dakota protested the award, alleging Airport Director Amanda Shankland altered the selection criteria at the last minute and accepted Guidance’s bid even though it would purportedly provide 32 percent less in revenues for the airport.  The company also alleged the RFP process was “rigged” to ensure no air tour provider other than Guidance could emerge the winner.

Shankland denied Dakota’s allegations and rejected the challenge, arguing that the airport could not support more than one air tour operator.

In August 2017, Dakota and a partner company sued the non-profit Airport Authority, Yavapai County, Guidance, and Shankland in federal court. The anti-trust lawsuit alleged the Airport Authority lodged a false complaint with the FAA against about the company and failed to comply with the settlement of Dakota’s 2014 complaint.

The federal lawsuit also alleged the airport’s Master Plan allowed for more than one tour operator, and that the RFP process “was intended to and will ultimately foreclose and end competition” for airport-based air tours of the Sedona area.

A federal judge in Prescott dropped Yavapai County and Guidance from Dakota’s lawsuit in 2018, but allowed the claims against the Airport Authority and Shankland to move forth. In April 2019, that same judge dismissed the case per a stipulation among the remaining parties, “with each party bearing its own costs and attorneys’ fees in this action.”

With the federal case dismissed, there was nothing stopping the Airport Authority from moving forward with enforcing the 30-day vacate notice through a forcible detainer action with the Yavapai County Superior Court. By then, a number of concerns had been documented in various court files.

For instance, the Airport Authority presented an independent consultant to provide expert testimony to support one of its arguments against Dakota. However, neither the expert nor the Authority revealed to the court that the expert was affiliated with Guidance.

There is also a record showing the complaint made to the FAA about Dakota was found to be unsubstantiated. And that if Dakota could no longer be based at the Sedona airport then the company would have had to pay the Airport Authority for every takeoff and landing at a non-leasee level.

If the Arizona Supreme Court refuses to hear Dakota’s appeal then the company will be responsible for paying the Airport Authority’s legal expenses related to the eviction action.