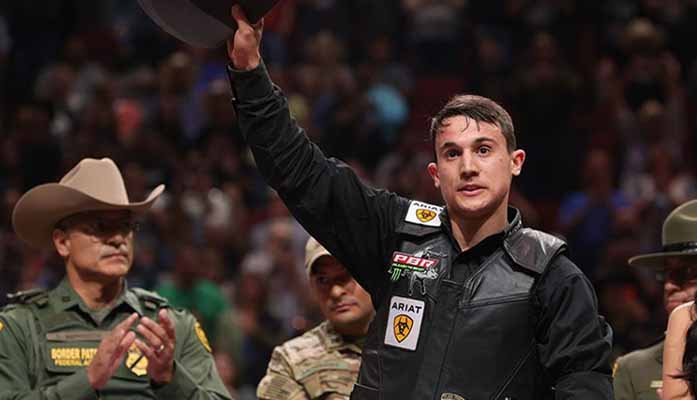 Last month the Professional Bull Riders rode into the Gila River Arena in Glendale for a weekend event which drew attention to the work done by U.S. Border Patrol employees and the job opportunities the federal law enforcement agency offers.

The PBR U.S. Border Patrol Invitational on March 12-13 featured the top 35 riders in the world putting on a show for more than 18,500 spectators, many of whom worked for USBP. The event, however, was more than a fun time – it is a way recognize the efforts of local employees and promote the numerous types of careers available within the agency.

“U.S. Border Patrol uses PBR as a tool to educate fans about employment opportunities,” PBR spokesman Andrew Giangola told AZ Free News. “PBR is one of USBP’s most effective means for attracting qualified candidates to serve in protecting our nation, according to the agency.”

USBP Tucson Sector Chief John Modlin recently gave a shout out to the PBR and the Glendale event on Twitter, sharing a highlight video celebrating the weekend’s rodeo excitement along with the service of the men and women of USBP.

Giangola says the U.S. Border Patrol has been a title sponsor of one PBR event a year since 2018. But the agency’s involvement with PBR is not limited to just its title event, as the USBP Honor Guard participates at many events across the country and the agency sponsors some of the sport’s top riders.

This year, that sponsorship includes Cooper Davis, the 2016 world champion; Keyshawn Whitehorse, the 2017 rookie of the year; Daylon Swearingen, the 2019 college bull riding champion; and Andrew Alvidrez, who has been a top 30 rider the last three years.

And then there are the bullfighters – PBR’s name for the safety workers who are on the dirt in the arena with the bulls and riders. At the recent event in Glendale, the bullfighters donned U.S. Border Patrol vests and other regalia, drawing even more attention to the agency.

Those who missed last month’s PBR event will have another opportunity later in the year to watch professional bull riding when PBR’s new Team Series comes to the Gila River Arena on Oct. 14 to 16.

The three day event is part of a 10 event season which will run from July to November with eight founding teams, including the Arizona Ridge Riders.

“Each stop on the schedule will be a real happening, with plenty of fun events for fans and opportunities to come together to rally around their team,” said Sean Gleason, PBR’s CEO and  Commissioner. “It will be exciting to watch the local fan base in Arizona grow.”

The league will host its first PBR Team Series draft on May 23 with the Ridge Riders having the sixth draft pick. Each team will be comprised of seven riders  and three practice squad members, with five riders per team competing at each event.

All PBR Team Series events will be carried on either the CBS Television Network, streaming live on Paramount+, CBS Sports Network, or RidePass on Pluto TV. The team championship will be held in Las Vegas.