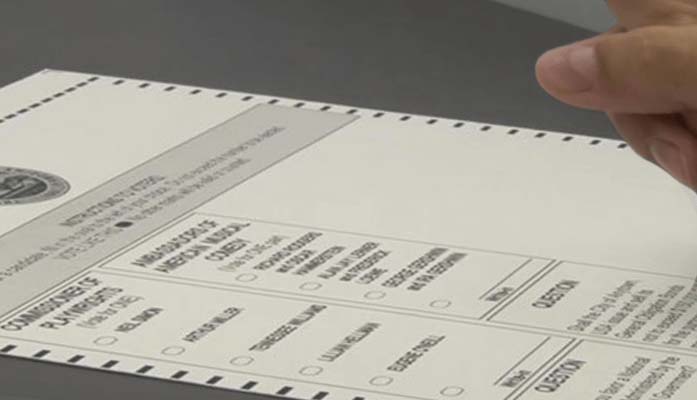 Arizona Attorney General Mark Brnovich has been asked to look into whether some of the state’s top election officials violated state law this week by issuing a statement opposing Proposition 309, which is on the Nov. 8 statewide ballot.

Prop 309 is before the voters to decide whether to amend several of Arizona’s current election laws. For an example, a “yes” vote would require voters to write their birthdate and government-issued identification number on the concealed early ballot affidavit, and for those who want to vote in-person they would be required to present an official photo identification at their polling place.

The Arizona Association of County Recorders (AACR) issued a statement Tuesday advocating a “no” vote which would leave in place the state’s existing laws about early ballot affidavits and voter identification. Among the duties of a county recorder is to conduct early voting, including mailing out early ballots and verifying signatures when early ballots are returned by voters.

Maricopa County Recorder Stephen Richer is the president of AACR and is the one who distributed the anti-Prop 309 statement on Tuesday. Yet according to election law expert Timothy La Sota, it appears Richer has violated two Arizona laws in connection with the statement, which was also posted to a website controlled by Maricopa County.

“Contrary to what Mr. Richer appears to believe, the County Recorder’s website is a publicly funded website, and using it as a vehicle to promote Mr. Richer’s political agenda is not only inappropriate, it is illegal,” attorney La Sota wrote, pointing Brnovich to Arizona Revised Statute 11-410(A) and 16-192(A). “This website is not at Mr. Richer’s disposal to use as a campaign website for his favored political causes.”

That first statute states a county “shall not spend or use its resources, including the use or expenditure of monies, accounts, credit, facilities, vehicles, postage, telecommunications, computer hardware and software, web pages, personnel, equipment, materials, buildings or any other thing of value” for the purpose of swaying an election outcome.

The second statute prohibits the state and “any public agency, department, board, commission, committee, council or authority” from spending or using public resources to influence an election, including the use of “computer hardware and software, web pages and personnel and any other thing of value of the public entity.”

La Sota pointed out that data associated with the document indicates the AACR statement -which includes the names of all 15 county recorders- was created by one of Richer’s employees during office hours, another “no no,” he told the attorney general.

“As a countywide elected official charged with various election related duties, Mr. Richer should know this,” La Sota added. “And his actions in placing his thumb on the scale illegally in this context do not auger well for maintaining a professional perception in other realms.”

During an interview Thursday morning, Amy Yentes of the Arizona Free Enterprise Club discussed why Arizona law expressly prohibits the government from electioneering activities in an effort to sway a particular race or contest.

“This is a protection for taxpayers,” Yentes told KFYI’s James T. Harris. She also supports La Sota’s request to Brnovich for an investigation into how the AACR’s anti-Prop 309 statement came to be created by a Maricopa County employee and posted to the county’s website.

“What is more disturbing is that Stephen Richer is an election administrator,” Yentes told Harris. “It is quite concerning that he can’t even follow basic election law and yet we’re trusting him to administer our elections.”

But that is not the only problem stemming from Richer’s distribution of the anti-Prop 309 statement, which he said on Tuesday afternoon was approved by AACR members by “unanimous voice vote (no nays, all ays).” Richer also tweeted that “14 of the 15 counties were present” for the vote, with only Apache County absent.

According to Cochise County Recorder David Stevens, the inference voters will make from the AACR statement and Richer’s social media comments is that all 15 county recorders are against Prop 309. In fact, Richer retweeted someone else’s comment that the vote was unanimous against the proposition.

That, Stevens says, is not true. In fact, he is an adamant supporter of Prop 309 and has demanded Richer correct the AACR statement and clear any misperception.

“Stephen, I was out of the office yesterday and did not see this email. I STRONGLY OBJECT to anyone assigning an opinion to me without my expressed consent. Silence is NOT acceptance. I do support prop 309 and kindly request you remove my name from this list and issue a retraction immediately,” Stevens wrote.

As of press time, Stevens had no contact from Richer about the Prop 309 issue. He was, however, included on a mass email the Maricopa County Recorder sent to his fellow recorders Wednesday evening.