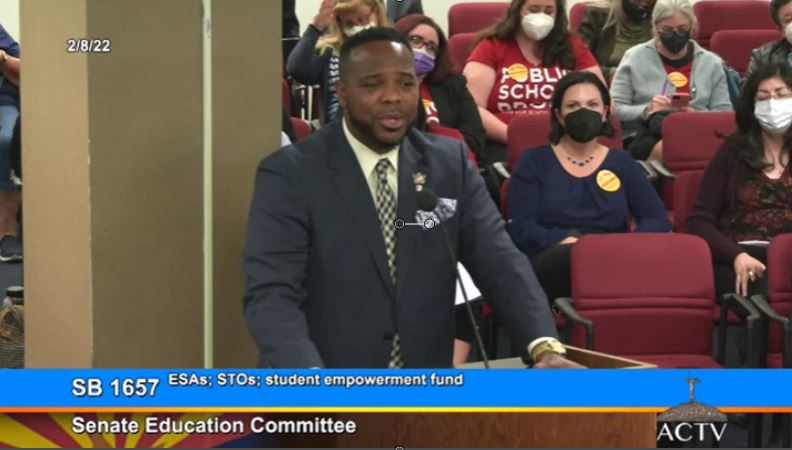 “There is nothing more important to humanity right now than school choice,” said Anderson. “In 1865, it was an unpopular decision for a lot of legislators to get together to end a system that was as American as apple pie,” said Anderson. “But here we are in 2022, asking a group of legislators once again to make an unpopular decision, which is to end educational slavery.”

SB1657 would expand eligibility for Arizona’s school choice system, the Empowerment Scholarship Account (ESA) program, by allowing students with: disabilities identified by public school systems in other states; a parent that is a veteran, first responder, or full-time health professional; income that qualifies for federal free and reduced-price lunch programs; a household that receives benefits from Supplemental Nutrition Assistance Program, Temporary Assistance for Needy Families, or Section 8 Public Housing Assistance; participation in federal Title I services for low-income students under the Every Student Succeeds Act (ESSA); residence in the attendance boundary of a school that qualifies for schoolwide Title I Program funding under ESSA or whose governing board submitted a plan to the School Facilities Oversight Board within the last two years requesting additional construction or funding due to exceeding existing capacity; or current or past participation in the Education Recovery Benefit Program, Open for Learning Recovery Benefit Program, or any successor state grant program.

The Senate Education Committee passed the bill along party lines, 5-3. Even Anderson’s testimony on how the current education system fails the children of his community, and how school choice initiatives helped him escape a life of crime, poverty, and even early death wasn’t enough to persuade the three committee Democrats.

“I just have to mention this — and I don’t normally talk about voters in the chamber — but it’s been brought up twice now,” stated Boyer. “I have a poll from last year, Signal, considered the most accurate pollster by the New York Times. Once voters heard the description of this particular bill last year, they supported this. Seventy percent support. That was last year. This year, again when the particulars of this program were described, 74 percent. It’s an increase of four percent just this year, with strong majorities among Republicans, Democrats, and Independents. This is simply what the public wants and what the parents want.”

During his testimony, Anderson challenged the rhetoric that systems needed to end and funding needed to increase or be left untouched, pointing out that the current system of public funding trapping and hurting minority children was steeped in financial self-interest. He said that the school-to-prison pipeline was the elephant in the room.

Anderson argued further that the $31,000 spent by the state on each prisoner could be mitigated by allowing the $15,000 it would take to offer a student school choice.

“We need a lifeline in the black community right now,” said Anderson. “In 1864 we were chained to plantations, but in 2022 we’re chained to failing schools.”

Boyer asked if Anderson had personally seen ESAs help minority children. Anderson revealed that he had, and was also one of those children who benefited from school choice. The pastor described how he was able to avoid being recruited for selling crack cocaine because he received a scholarship to attend an elite private school in Chicago, Illinois — one that his mother couldn’t dream of affording, though she worked three jobs. Anderson recounted how that education set him on a path to playing for the NFL and eventually earning enough money to ensure his mother didn’t have to work again. Anderson added that of his five childhood friends, three were in prison and two were dead by the time he graduated high school.

Senator Theresa Hatathalie (D-Coal Mine Canyon) expressed concern that there weren’t accountability measures for the academic progress of ESA students. Boyer reiterated what Anderson pointed out: that private schools have better graduation rates and other indicators of success than public schools have shown.

Anderson brought up data that the graduation rates at Historically Black Colleges and Universities (HBCUs) were higher for students coming from private schools than those from public schools. He said that it wasn’t just about the success metrics, but safety. Anderson described how, just that morning, he witnessed eight black elementary school children exposing themselves to danger because they had to walk to their public school in South Phoenix before daybreak.

“If you’re going to a school where 98 percent of the people are graduating, there’s no other proof, there’s no other test you could give somebody to say the school is succeeding,” said Anderson. “I’ve never watched the news and it says, ‘Harvard graduates rob Circle K, details at six.’ That’s not what you see. But what you do see is, ‘South Mountain High School dropout mugs lady, details at six.’ So instead of test scores, why don’t we worry about graduation rates and continuation rates? If black and brown kids are going to college, that means they’re not going to penitentiaries.”