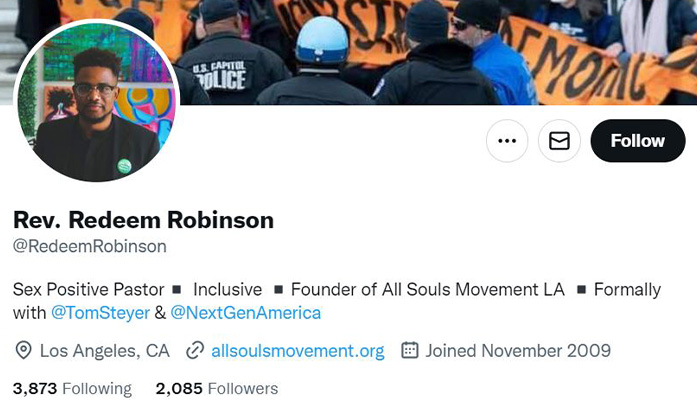 Robinson, a Californian and former Arizonan who claims to be a Christian pastor despite violating Scripture, claimed Hobbs’ actions were mistakes.

“Contrary to popular beliefs, Katie Hobbs isn’t racist. If she was, I would let you know,” tweeted Robinson. “She made mistakes. We all do. AZ, she needs your vote on Nov 8th!”

In response, Adams said Robinson’s claim was a lie and quoted a Bible verse condemning liars.

“This is a lie Redeem,” wrote Adams. “Proverbs 12:22: Lying lips are an abomination to the Lord, but those who act faithfully are his delight.”

Robinson came to Phoenix earlier this week to do voter outreach on behalf of Democratic candidates.

Over the past decade until last year, Robinson was involved throughout Arizona as a “pastor” at various churches, a political activist, and politician. Robinson served as a “pastor” with All Nations Temple AME Zion Church in Tucson, then Ebenezer Church in Phoenix.

The “sex-positive” Robinson was also a failed 2018 Democratic candidate for the Arizona Senate. His candidacy took a hit from news coverage of domestic violence charges filed by his ex-girlfriend, with whom he had a child out of wedlock. (He has a total of three daughters, who he says live in Arizona while he lives in California). The court later dismissed the charges against Robinson because the prosecutor’s office wasn’t prepared to proceed.

It appears that Robinson’s latest efforts are a fusion of alleged “Christianity” and political activism: All Souls Movement, a nonprofit he founded and directs. Robinson pays himself to do “paid partnership” social media posts for his nonprofit; earlier this month, he posted a video on Instagram telling people to “not be an a**hole” and claiming that being a Christian doesn’t mean abstaining from sin. Notably, Robinson didn’t cite any Scripture to justify his claims.

“Jesus’ ministry was as simple as it. Literally, His ministry on earth was telling us don’t be an asshole. With the richer getting richer and poor getting poorer, and white supremacy going unchecked, and racism out of control, and homophobia, xenophobia, and transphobia, and sexism just out of control,” said Robinson. “We need to hear daily. Don’t be an asshole. That’s what true holiness is about. It’s not about long dresses and abstaining from certain things. It’s about treating other people right so that the world can be a better place.”