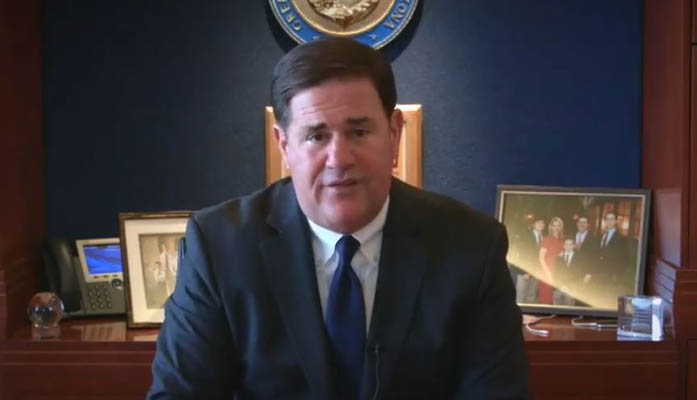 Starting this Friday, low-income families with K-12 students will be able to apply online for up to $7,000 in immediate relief to support educational opportunities which will close the achievement gap and better equip underserved students.

Gov. Doug Ducey announced Tuesday an initial $10 million investment for Arizona’s COVID-19 Educational Recovery Benefit program. The funding – on a first come, first serve basis – will provide choice for families facing financial and educational barriers due to unnecessary closures and school mandates which do not comply with state law.

“Our COVID-19 Educational Recovery Benefit will empower parents to exercise their choice when it comes to their child’s education and COVID-19 mitigation strategies,” Ducey said. “It will also give families in need the opportunity to access educational resources like tutoring, child care, transportation and other needs.”

According to the governor’s office, Ducey has been working for weeks to create an additional program to provide more education options for families.

Eligible families can have a total household income up to 350 percent of the Federal Poverty Level. In addition, applicants must demonstrate the student’s current school is isolating, quarantining, or subjecting children to physical in-school COVID-19 constraints such as mask mandates or preferential treatment of vaccinated students.

“We know that historically disadvantaged communities bear the brunt of excessive and overbearing measures, and we want to ensure these students are protected,” Ducey said.

“Educators, families and state leaders are working hard to get students back on track, and the Educational Recovery Benefit program will make sure kids have every opportunity to grow and thrive,” said Fann.

Bowers noted the desire to keep children “safe, healthy, and achieving” during the pandemic, adding that with the new program, “we can do it all at the same time.”

Grant applications can be submitted starting Friday. Additional information is available at https://arizonatogether.org/educationalrecoverybenefit/ With the legislature expected to take up the budget package sooner than later, three high-profile bills appear to have been shelved by Senate President Karen Fann, despite growing calls for her to calendar them for a vote before the session ends.

HB2190, also known as the Vaccine Passport bill, along with SB1074 and SB1532 cleared the House and were transmitted to the Senate. But none have appeared on a Senate calendar, which is controlled by Fann.

SB1074 would prohibit state government entities, including cities and counties, from forcing employees to engage in orientation, training, or therapy that is based on a theory of blame or judgment on the basis of race, ethnicity, or gender. SB1532 bans Arizona’s public schools and community colleges from discussing controversial issues unless presented in a way which addresses diverse or opposing perspectives. Both are commonly referred to as anti-Critical Race Theory legislation.

Meanwhile, HB2190 seeks to protect the rights and private medical data of Arizonans against efforts to force consumers to prove their COVID-19 vaccine status or disclose their status in order to receive government benefits.  The current version was introduced in February by Sen. Kelly Townsend and cleared the House through efforts by Rep. Bret Roberts, who has expressed frustration at the lack of action in the Senate.

“Let the Senators that want to be on the record, be on the record on this important issue!” he tweeted last week. In response, Sen. Michelle Ugenti-Rita responded by publicly supporting a vote on HB2190.

“I would like an opportunity to cast a yes vote for this bill. Put it on the board of truth!” tweeted Ugenti-Rita, who chairs the Senate’s Government Committee.

Behind the scenes, some members of the Republican caucus point to the fact Fann allowed SCR1044 -which deals with in-state tuition for DREAMERS and others without U.S. citizenship- to go to a floor vote but has dug in her heels on bills which seek to protect Arizona workers and students.

Bills which Fann has placed on Monday’s Senate calendar involve election deadlines, instruction of the Holocaust, the impounding of vehicles by law enforcement, and advertising rules for political action committees.