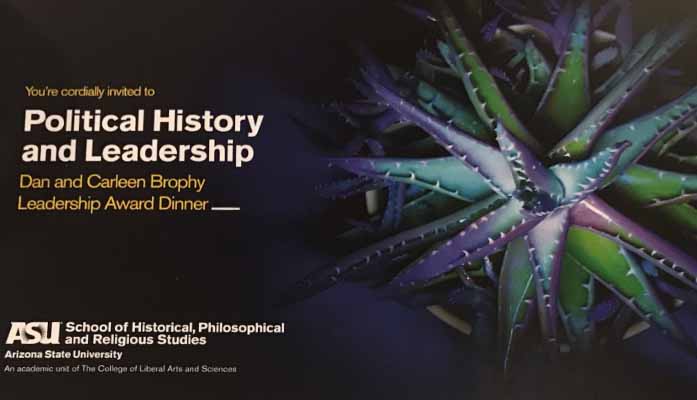 Arizona State University (ASU) decided to cancel a prominent conservative program’s first annual fundraiser scheduled for next month, and there are conflicting explanations behind their decision. The event was arranged to honor prominent community leaders Dan and Carleen Brophy; 100 percent of the event proceeds were to go to the program.

Three different reasons for the event’s cancellation were given to different parties involved in the event. The first two related to technicalities: the uptick in COVID-19 cases, and one unnamed faculty member’s failure to follow ASU rules. The third had to do with a more contentious topic: the featured speakers.

ASU’s decision means that the program, Political History and Leadership (PHL), may not obtain funds it anticipated from the event, which was to take place at the Desert Botanical Garden. Each guest would have paid $250 for attendance, and tables of eight would’ve pulled in $2,000.  The PHL Program is part of the School of Historical, Philosophical, and Religious Studies.

AZ Free News learned that ASU informed several of the featured speakers that the event was canceled due to the increase in COVID-19 cases.

Scientists hypothesize that COVID-19 likely functions as a seasonal disease. Last year, the case counts for February were nominal after the holiday spike.

AZ Free News also learned that ASU President Michael Crow wasn’t aware of the event or its cancellation, and that ASU would reschedule. However, emails obtained by AZ Free News indicated that the ASU administration was responsible for canceling the event.

ASU spokesman Jerry Gonzalez told AZ Free News a slightly different story. Gonzalez said that a faculty member broke the university’s scheduling protocol. When we asked which protocol was broken, ASU said it didn’t have any more information to provide.

AZ Free News also inquired of the ASU Foundation, which was in charge of receiving the program funds earned from the event and approving any event planning. They didn’t respond to any of our emails.

A third potential reason surrounding the event cancellation had nothing to do with logistics. Some reported that they were informed that the event was canceled due to controversy over the choice of guest speakers: Congressman Andy Biggs (R-AZ-05) and former Utah congressman and Fox News contributor Jason Chaffetz.

In a press release, Arizona Free Enterprise Club President Scot Mussi derided ASU based on the claim that they canceled the fundraiser over Biggs and Chaffetz.

“It is outrageous that Michael Crow and ASU would cancel an ASU Foundation Fundraiser because they oppose the views and philosophy of the featured speakers attending the event. It is becoming clear that woke cancel culture has taken over every office at the University,” said Mussi. “ASU doesn’t have a problem with liberal activists and public officials appearing at the school for various events. It is well known that Democrat politicians, including US Senator Kyrsten Sinema, have in the past or currently work for the University at taxpayer expense. It only becomes a problem when the speaker is a conservative. If Michael Crow is going to surrender to the ‘cancel culture’ mob, then he is no longer fit to be ASU President and should resign.”

Those registered for the PHL event will receive full refunds.