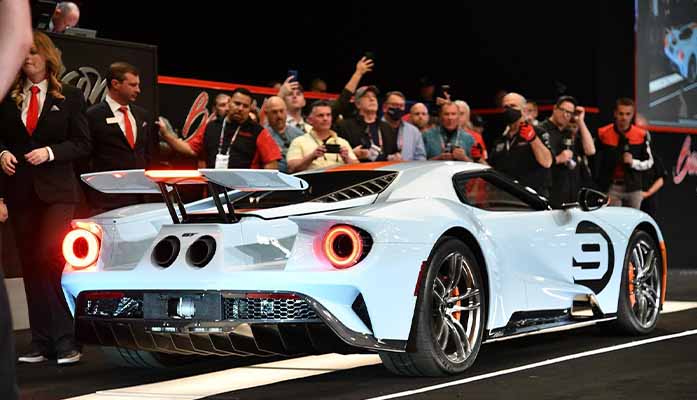 History was made at Barrett-Jackson in Scottsdale last week when a record $3.6 million was bid for a 2023 Chevrolet Corvette Z06, VIN 001, during a multi-day charity event celebrating the 50th anniversary of Barrett-Jackson.

The high bid for the coveted first retail production of the 70th Anniversary Corvette model came from Michelle Mauzy, who donated an additional $100,000. All proceeds from the sale went directly to Operation Homefront.

Overall, more than $8.8 million was raised for charity from the sale of 10 vehicles during the event, pushing the company’s all-time charity total to over $144 million.

Several other highly-prized vehicles were auctioned off, include a custom 2022 Karma GS-6 “Mr. 305 Edition” owned by Grammy Award-winning artist Pitbull, who attended the event Saturday night as his vehicle was sold. The Karma sold for $500,000, with another $200,000 donated, all earmarked for Selfless Love Foundation and The SLAM Foundation.

“Raising over $8.8 million for charity this weekend was the perfect way to honor our 50th Anniversary,” said Craig Jackson, chairman and CEO of Barrett-Jackson. “It was an absolute honor to share our auction block with some of the world’s most influential artists and business leaders, including Pitbull, Bret Michaels and Henry Ford III to raise both funds and awareness for many worthy causes.

Jackson added that giving back to the community is a priority for the company.

“I am confident my parents Nellie and Russ as well as Tom Barrett would be proud to see that we never lost sight of their philanthropic vision,” he said.

Pitbull’s Karma wasn’t the only vehicle at the charity auction with connections to well-known celebrity philanthropists, including rocket Bret Michaels who supported the sale of a 1973 De Tomaso Pantera. One hundred percent of the $155,000 sale will benefit the Arizona-based Barrow Neurological Foundation and their upcoming charitable event, Neuro Night.

Another $500,000 was donated courtesy of Greg and Jen Holmes of the Holmes Family Trust, who pledged the money as a match to the sale price of a 1963 Chevrolet Corvette Custom Split-Window coupe. Those funds are going to Barrett-Jackson Charities to support the Driven Hearts campaign for the American Heart Association.

“The amount of good to come from the nearly $9 million we raised from charity is simply immeasurable,” Davis said. “From supporting life-saving medical research and higher education opportunities for our youth, to supporting our military veterans and their families, we aren’t just raising money, we’re creating hope, improving lives and lifting spirits. I couldn’t be more honored to be connected to the heart and soul of this community.”