Arizonans have one less voice in two congressional committees – the National Resources Committee and the Oversight and Reform Committee – after the House voted Wednesday to punish Congressman Paul Gosar (R-AZ-04) for posting an anime meme. The offending post photoshopped Gosar’s face on that of the protagonist featured in the intro of a popular anime series, Attack on Titan, attacking villains with the photoshopped faces of Congresswoman Alexandria Ocasio-Cortez (D-NY-14) and President Joe Biden. The anime meme also incorporated clips of the border crisis and Border Patrol.

The House also censured Gosar with their vote (House Resolution 789), breaking an 11-year dry spell since the last censure. The House decision, 223-207, was largely partisan with the exception of several congressmen generally considered “Republicans In Name Only” (RINOs) for their tendency to oppose Republican policies and stances. Those members were Congressman Adam Kizinger (R-IL-16) and Liz Cheney (R-WY); Congressman David Joyce (R-OH-14) opted to vote “present” only.

The 4 hours of debate over Gosar’s censure and committee removals consisted of the same arguments. Democrats and Republicans alike largely rehashed the same talking points other members of their party were making.

Democrats’ general argument was that Gosar’s meme fantasized and incited violence. They claimed Gosar’s post was the same kind of hate speech that led to incidents like the January 6 storming of the Capitol. Many reasoned that Gosar should be punished because employers fire employees, and schools suspend or expel students, over similar or lesser offenses. Democrats claimed that they were getting death threats because of the meme.

Aside from insisting that the entire debate was a waste of time better spent on putting out bigger fires – such as the border crisis or the mounting tensions with both Russia and China – Republicans warned that the resolution would set a bad precedent, in which the majority party could pick and remove at their leisure who may sit on committees. Nearly every Republican that took to the podium asserted that Democrats were acting hypocritically with a “rules for thee, but not for me” attitude, citing Democrats’ speech encouraging the protests as cities were destroyed during last year’s George Floyd riots.

Prior to Gosar, Congresswoman Marjorie Taylor Greene (R-GA-14) faced similar threats of censure and committee removal for her past social media posts. Though Democrats dropped the censure threats, the latter punishment stuck. Greene was stripped for remarks she made prior to her election and even prior to her campaign, effectively limiting her influence from the start of her term. Greene also continues to accrue fines for refusing to mask up; according to Greene’s latest estimates, House Speaker Nancy Pelosi has fined her over $60,500 and counting.

Gosar defended himself a little over midway through the House vote. He explained that the anime was intended to convey a policy battle regarding amnesty for illegal aliens, catering toward young voters “who are too often overlooked.” Gosar asserted that the meme wasn’t intended as a threat.

“[I] reject the mischaracterization and accusations from many in this body that the cartoon from my office is dangerous or threatening. It was not, and I reject the false narrative categorically,” explained Gosar. “I do not espouse violence towards anyone, I never have. It was not my purpose to make anyone upset. I voluntarily took the cartoon down, not because it was itself a threat but because some thought it was. Out of compassion for those who generally felt offense, I self-censored.”

It appeared that the only member who could offer cultural context to the meaning and intent behind the anime meme was Congressman Andy Biggs (R-AZ-05).

“I’ve lived in Japan for several years! I speak Japanese. I read and write Japanese. This is an anime. Highly popular. Stylized. Intended to demonstrate the alienation people feel – particularly young people – in their cultures. Now, does anime have violence? Yes. It’s highly stylized violence,” explained Biggs. “It was not Mr. Gosar’s intention, I believe, to induce anyone to violence, and like he, I also condemn violence. I would ask you to reconsider further usurping and taking control of this body for political purposes because that’s what’s happening here today.”

Ocasio-Cortez said that the Republicans’ downplaying of the meme’s severity was “nihilism.” She also inferred that average Americans look up to congressional members for influence and direction. Ocasio-Cortez then called the meme an incitement to violence that would directly connect to violent acts. The congresswoman insisted that the meme shouldn’t be simplified as a mere trend, but examined critically for all its problematic parts and their significance. Conversely, Ocasio-Cortez insisted that the vote on such a matter should be simple.

“So when we talk about […] that these depictions are part of a larger trend of misogyny, and racist misogyny, this has results in dampening the participation,” said Ocasio-Cortez. “This vote is not as complex as perhaps the Republican leader would like to make folks believe. It’s pretty cut and dry. Does anyone in this chamber find this behavior acceptable? Would you allow depictions of violence against women and colleagues in your home? In your school board? In your city council? In a church? If it’s not acceptable there, why is it acceptable here?”

Though Ocasio-Cortez and the Democrats wanted an apology for the meme with their vote, they didn’t get one – and it doesn’t appear that they will. 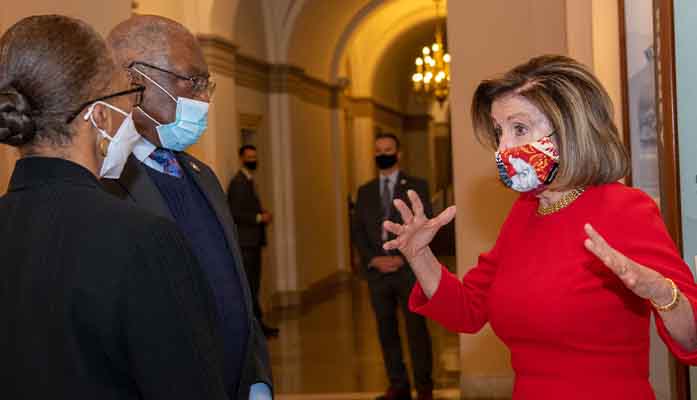